The Beautiful Mind is a spectacular online photo exhibition that features images of the brain taken by neuroscientists themselves. The enception.org site features a Flash display of the exhibit, with a useful roll-over feature where you can see the person who took the shot, where it was taken, and what anatomical feature is being displayed.

The online exhibit will become a traveling exhibition beginning in the new year, starting in London and then moving around Europe. The exhibition is being organized by CORTEX: Cooperation in Research and Training for European Excellence in the Neurosciences.

The hattip goes to Mind Hacks, who just featured the exhibit info in the post The Fire Within. Almost all The Beautiful Mind images use flourescence techniques, which we have shown before in Brainbows and More on Brainbow.

Below I feature some of the images. For more go for a visit to The Beautiful Mind. 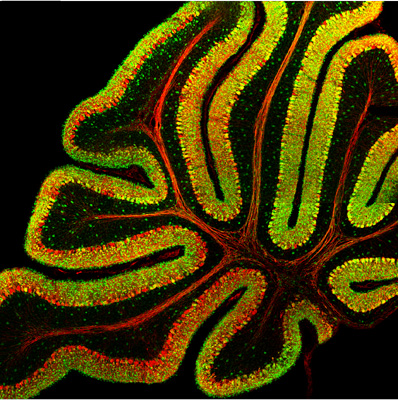 2 thoughts on “The Beautiful Brain”