Shihui Han and Georg Northoff have just published Culture-Sensitive Neural Substrates of Human Cognition: A Transcultural Neuroimaging Approach. This article will prove foundational for “cultural neuroscience,” a term Han & Northoff use near the end of the article. I highly recommend that everyone read the full version (pdf), but will outline and comment on it here.

In this Perspectives piece in Nature Neuroscience Reviews, Han and Northoff review the evidence on how culture influences neural mechanisms, highlight the need to integrate social neuroscience and cultural cognition research, argue for transcultural neuroimaging as an effective method for cultural neuroscience, and lay out implications for the future of this emerging field.

But if you don’t take my word for it, here’s their abstract:

Our brains and minds are shaped by our experiences, which mainly occur in the context of the culture in which we develop and live. Although psychologists have provided abundant evidence for diversity of human cognition and behaviour across cultures, the question of whether the neural correlates of human cognition are also culture-dependent is often not considered by neuroscientists. However, recent transcultural neuroimaging studies have demonstrated that one’s cultural background can influence the neural activity that underlies both high- and low-level cognitive functions. The findings provide a novel approach by which to distinguish culture-sensitive from culture-invariant neural mechanisms of human cognition.

Han and Northoff systematically cover research on “cultural effects on cognition,” including perceptual processing, attentional modulation, language and music, and number representation and mental calculation. Their Figure 1, presented below, summarizes research on culture and attention, highlighting context-dependent differences in attention between Americans and East Asians.

Another example that I found particularly striking was the difference between native English speakers and native Chinese speakers while reading. English readers showed activation in the superior temporal gyrus, while Chinese readers had activation in the dorsal extent of the inferior parietal lobe. This difference is attributed to the contrast in language structure and representation, and not to cultural ideology or linguistic meaning:

“Rather than being an effect of culture in a broad sense, this finding might reflect a basic difference between non-phonetic and phonetic written language: alphabetic words, such as English words, can be ready by assembling fine-grained phonemic units, whereas Chinese characters consist of intricate strokes and map onto phonology at the mono-syllable level (648).”

Han and Northoff also review research on “cultural effects on social cognition,” going over emotional processing, mental attribution, and self representation and self awareness. Figure 2 shows how culture can shape the neural correlates of sense of self, in particular the difference between more individualistic and contextual selves. One fascinating result is that while Westerners showed activation of the ventral medial prefrontal cortex only in association with self judgment, Chinese study participants had activation with both self and mother. 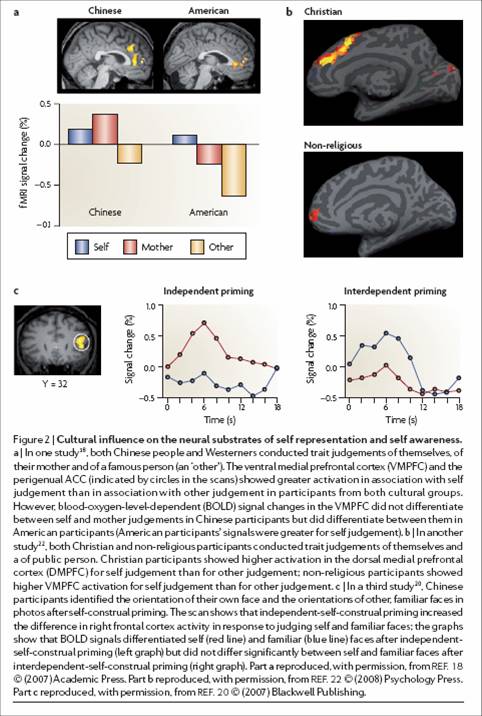 Besides the excellent summary of ongoing research, Han and Northoff make a crucial argument about integrating cultural cognition and social neuroscience at the beginning of their paper. Below I have pasted their two boxes on each field. 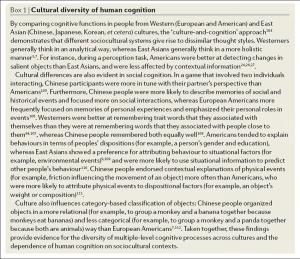 “As cross-cultural psychology has offered accumulating evidence that social cognition and social behaviour depend greatly on sociocultural context, social neuroscientists are now beginning to consider cultural effects on the neural substrates of human cognition… The meaning of ‘cultural differences’ could be extended to include not only groups with different social contexts and languages, but also groups with different religious beliefs (647).”

Transcultural imaging is presented by Han and Northoff as the method of choice for this sort of research. Box 3 summarizes this work. 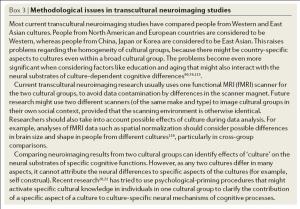 It is a powerful method, as long as we realize that fMRI is not a mind-reading machine (or culture-reading machine) and like any method, has its own increasingly recognized limitations. One real danger is reverting to cultural phrenology, where one brain area is seen to have a specific cultural function. Hints of this thinking lurk in the paper.

A non-phrenology imaging example is to examine “individuals from one group after they have been primed with different cultural knowledge.” Chinese subjects were primed with independent or interdependent self construals through reading essays filled with “I” or with “We.” In interpreting others’ faces, individuals primed for the interdependent self showed greater right middle frontal activity—the area associated with interpreting pictures of one’s own face.

The use of priming and framing, similar to the technical effects of language representation and the examination of mother in relation to self, point to different ways “culture” might achieve effects. This is a crucial methodological point that is quite different from the more monolithic Westerners vs. East Asians dichotomy that has prevailed in this sort of research.

Despite assertions that “of course there is no such thing as a homogeneous ‘Western’ or ‘East Asian’ culture” the convenience of this sort of dichotomous sampling still creates a homogenizing effect.

It also ignores other ways people might differ “culturally,” for example, rural vs. urban populations, people exposed to globalized media and consumption and those who are not, and those in highly unequal societies and those in less stratified societies. To really advance cultural neuroscience, sample and methodological convenience will have to give away to research that examines “cultural difference” as effectively as it examines neural substrates.

The Effects of Culture

In their concluding remarks, Han and Northoff address how to think more broadly about the effects of cultural processes on neural substrates, and outline some of the basic questions that cultural neuroscience faces.

They also add an important caveat about meaning, writing “it is important to remember that even though the same brain region might be recruited by different cultural groups during the same cognitive task, two cultural might have different meanings for the concepts involved in the task (652).” For example, the self concept appears to consistently activate the ventral medial prefrontal cortex in a cross-cultural sample. But the meaning attributed to that self concept, such as more independent or interdependent, can still differ even with the same general pattern of activation.

A fourth type of neural correlate not considered by Han and Nortoff would be (4) changes in systemic activation, where it is the consistent pattern of activation of different areas of the brain that corresponds to some aspect of culture. In my mind, this sort of approach would prove useful for ritual, rather than looking for task-based, functional activation or structural “difference.” Different rituals will tend to activate different series of brain regions and to create different patterns of links between brain regions.

Put differently, timing, location and duration of activation make a large difference in development. The same basic processes could also apply to how cultural achieves difference—the timing of activation, the links between regions, and the sequence of different areas of activation could all add up to synergistic effect.

Han and Northoff also work with a rather abstract and knowledge-based notion of cultural difference. This is not the only way to think about culture. Cultural practices, social contexts and physical symbols can all have effects without having a mediating “cultural psychology” (like concept of self) component. Symbols can extend cultural differences outside the brain; social contexts can elicit dramatically different scripted behavior; and cultural practices can entrain motor and motivational areas, alongside perceptual and social cognition.

Cultural neuroscience will also need to develop what it means by “culturally different task-solving strategies” in a more systematic way. Is this something like Bourdieu’s habitus, which we’ve examined before? Is it about the cultural embodiment of language and of categorization? What do they mean by “strategies” in a cultural sense, rather than just a cognitive sense?

Without addressing different senses of the cultural brain or the interactive effects that inequality and stress can have vis-à-vis the brain, cultural neuroscience will not quite position itself to have the integrative effects that potentially exist.

It will also need to address experience and the everyday brain in a more explicit fashion if it hopes to match up to the opening sentence in the abstract: “Our brains and mind are shaped by our experiences, which mainly occur in the context of the culture in which we develop and live.”

In describing the basic areas where cultural neuroscience might delve, Han and Northoff provide us with five areas, all focused on neural substrates rather than on culture and experience.

Cultural effects as modulatory or constitutional. “Do cultural experiences only modulate pre-existing and pre-established patterns of neural activity, or do they determine the patterns? (652)”

Brain systems as culture invariant or culture sensitive? “[T]here are some brain regions in which activity is the same across different cultures; for instance, the lateral occipital cortex seems to be implicated in object-processing tasks [across different cultural groups]… On the other hand, the neural activity in some brain areas strongly depends on a person’s cultural background: for example, that of the premotor cortex during mental calculation (652).”

Nature vs. Nurture. “Future transcultural neuroimaging studies could investigate alleles that do or do not differ between cultural groups and then relate their findings to the neural activity that is associated with culture-invariant and culture-sensitive tasks and stimuli… Studying second generation immigrants would provide a way to investigate the interaction between genetic and cultural backgrounds (652).”

Cultural adaptation. “What are the neural differences between native people and newly arrived, short-term and long-term immigrants? fMRI studies of immigrants might help us to understand where, how and on what timescale the neural substrates of cognitive processes change as a function of cultural influence (653).”

Cultural psychiatry. “Another interesting question is whether there are culture-specific symptoms of psychiatric disorders like schizophrenia and depression and, if so, whether these are reflected in structural or functional neural differences. For example, the specific form of delusion that is experienced by a patient with schizophrenia might depend on the patient’s cultural background (653).”

Strong dichotomies, lack of emergent interactions, little consideration of population dynamics and variation at either the neural or cultural level—it would be easy to level criticisms against the paper, as it is for most papers that are ambitious and synthetic.

The one thing that bothers me the most in the end is that we have “culture” and “brain” without context, body, experience or behavior. Neural substrates and cultural cognition are a poor substitute for the role of the body, everyday practices, and potent symbols in our lives. Does motor cortex have muscle substrates in the body? That sort of question does not really capture the systemic interactions and the specialization in both brain and muscle that leads to skilled action.

But the anthropologist often goes from critique to critique, and freezes when asked, Well, if you don’t agree, how would you test culture using neuroimaging? To answer that question, I would start by paying attention to the work and ideas of people like Shihui Han and George Northoff. They are actually doing the work, learning from their exciting results and from the mistakes made along the way.