I want to know what is going on inside this guy’s brain. 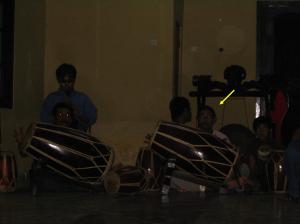 I am sure that we have all wanted to sneak peak into the brain of someone we know; a lover, a parent, or a colleague. In my case, I want to study the brain of my Kendang Pencak teacher, Pak Oseng. He has a highly trained skill that demands attention, musical ability and well-developed motion perception. The beauty of his skill to researchers is that it is both culturally unique and experimentally testable. His skill can inform us about mirror neurons, action and perception as well as enculturation, skill acquisition and the neuro-cultural nexus. For me, it could be a key to understanding one aspect of the relationship between music and movement in the human brain.

Oseng plays drums (Kendang Pencak) to accompany Sundanese martial arts (Pencak Silat) and he is one of the best around. He matches the moves of performing martial artists with corresponding rhythm, dynamics and intensity. His mimetic skill at bringing a musical component to punches, kicks, grapples and holds while sustaining an entertaining rhythm would be beyond the skill of most percussionists, but to Pak Oseng it has become second nature. He can sustain performances from 5 minutes long to a couple of hours without breaking a sweat (and that says a lot for someone who lives in the tropical climate of Indonesia). He can even do it while chain-smoking!

There are two sets of drums that are used to accompany Sundanese Pencak Silat performances. The Kendang Ibu (mother drum) sustains a steady tempo while the Kendang Anak (child drum) improvises freely in fitting with the moves of the martial artists performing. This free improvisation requires the close attention of the drummer to pre-empt moves such as punches that require to be accompanied by a loud hit of the drum. But it’s not always a 1:1 relationship between the sound and the movement. Drummers like Pak Oseng have to know how to build tension and how to read the body of the performer so that he can successfully accompany powerful moves while adding beauty to the flower of the movement (known as bunga).

As you would expect, the more familiar Pak Oseng is with the performer’s ability, the better he is at accompanying the performance i.e. his ability to read his co-performer is heightened by familiarity. However, the difference in his skill when accompanying familiar and unfamiliar co-performers is unnoticeable to most audiences.

So what does all this mean for neuroscience? Well, it is believed by some psychologists and some neuroscientists that music and movement are related through corresponding levels of tension. In no place is this more apparent than the example of Sundanese Pencak Silat. Strong punches are accompanied by loud hits, suspense is mimicked by stereotyped rhythms and the qualitative aspects of the movement are matched in timbre and tessitura. As far as music and movement being linked by corresponding levels of Tension? I’m convinced! The question remaining, however, is: how is it linked? The problem with current theories is their ethnocentricity and such a theory has to be cross-culturally valid. I believe that a mixture of neurophenomenology with a dash of ethnomusicology and a hint of dynamical systems theory is the key. At this early point in the process, the vital question for neuroscientists, psychologists and cognitive ethnomusicologists is where and how does the phenomenological transfer between music and movement occur?

That is where Pak Oseng comes in. Slap a guy with his kind of culture-specific musical and movement training into the lab, zap him with footage of Pencak Silat movement stimuli and probe him with the latest neuroimaging device and I’m sure we’ll be in a position to start finding out! (Just don’t forget to brief him and ask him to sign the ethics form on the way in! hehehe! — Pak Oseng has said as long as there are no needles and the lab pays for his transport, accommodation and food, then he is totally up for it).

Okay, okay, okay, for those of you desiring at least a small description of experimental protocol: here it is: For a start, we’d need to use equipment with nice high temporal resolution and good spatial mapping, something like MEG might do the trick. Just give me a nice budget to hire a couple of good statisticians and programmers! Quantifying the stimuli would not be a problem with today’s movement analysis technology. Plus, categorising the stimuli would not be a problem either. You see, in this experiment, the participants also become your research collaborators. Pencak Silat experts would be able to create, choreograph and categorise the footage. The beauty of such an experiment is that the stimuli is quantifiable, context-driven and ecologically valid.

Sundanese Pencak Silat is highly suited to the proposed experiment because the choreomusical relationships are strong and almost entirely unidirectional (i.e. the music accompanies the performance).  The opportunity to use musicians as observers rather than the audience or even the movement artists themselves is incredibly fortuitous for experimental researchers. Sundanese Pencak Silat musicians probably spend more time closely watching the movement than audience members or the movement artists. They have to watch the movement in order to make their music meaningful and the overall performance entertaining.

By studying musicians like Oseng, we will be learning something about the phenomenological transfer from movement to music. Furthermore, such musicians are highly trained and specialized observers! Hard-core psychophysicists love highly trained and reliable observers. They give more accurate and reliable data. Anyone who has participated in a laborious psychophysics experiment, understands how much concentration these experiments can often require. With more than two decades of experience in accompanying Pencak Silat, Pak Oseng would be the ultimate participant/collaborator! The information we could obtain about the relationship between music and movement, about mirror neurons and about perception and action is tantalizing!!! That’s why I want to know what is going on inside Pak Oseng’s brain!


For more information about Pak Oseng, Pak Darman and Pencak Silat, you can read the following article in the online academic journal, Inside Indonesia: Music for the fight; movements for the soul. The author will be speaking at the Music and Movements in Indonesian Culture Conference to be held during the first week of October in Sydney, Australia.

For more about musical and movement tension:
Krumhansl C L, 1995 “Effects of musical context on similarity and expectancy” Systematische Musikwissenschaft 3 211 – 250

(i) Furthermore, comparing the brain’s response to ballet and capoeira does not entirely make sense. Capoeira moves are symbolic of fighting, Ballet moves are demonstrations of beauty. If you look at some of the raw data you will see that Capoeira stimuli generated a slightly higher response in mirror neurons of both Ballerinas watching Ballet and Capoeiristas watching Capoeira. While the stimuli was matched for kinaesthetics, the stimuli was not matched for emotional or symbolic saliency. I believe that a fear-filling kick is more emotionally salient than a fly-highing pirouette (not that I haven’t been brought to tears by Balanchine, to laughter by Jiří Kylián or to maddening ecstasy by Nijinsky, but my visceral reaction to watching a powerful kick is deeper and more immediate).