This is Pak Darman: 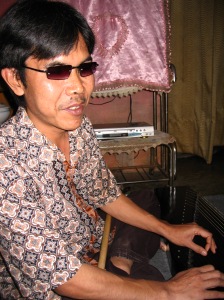 Although pictured playing the Kecapi (a traditional Sundanese string instrument), Pak Darman can also play the suling (a type of bamboo flute) and the tarompet (a double reed woodwind instrument). At home he works as a masseur but a large part of his income (which is not that large) comes from being hired for local performances. A regular gig for Pak Darman is accompanying Pencak Silat performances with the Tarompet.

In my last blog, I mentioned that Sundanese Pencak Silat musicians probably spend more time closely watching the movement of a performance than the audience or even the movement artists themselves. This puts Pak Darman in an interesting position. He can’t see the performances. Pak Darman is blind.

There is no question though that Pak Darman is a skilled Tarompet player and a respected Pencak Silat accompanist. During Pencak Silat Performances, Pak Darman has to respond immediately to changes in rhythm, speed and excitement. He has to match the intensity of a performance with his choice of melody, the loudness of his playing and the roughness of its delivery. In fact, his skill and knowledge of his craft is so deep that simply by listening to the improvisations played on the Kendang Anak, Pak Darman can quite often tell you who is performing Pencak Silat movements.

On one occassion, I met Pak Darman just after filming a Pencak Silat performance. He asked to listen to the recording that I made. “Oh, that’s Pak Haji Uho.” He commented after only a few seconds of listening to the recording. Indeed, to my amazement, Pak Darman had guessed correctly that it was Pak Haji Uho who was performing.

It is incredible for me to imagine that Pak Darman was able to tell who was performing simply by listening to the improvised kendang anak accompaniment that mimicked and gave acoustic life to the Pencak Silat movements. I have not found other artists with this degree of skill.  Most people I interviewed took longer just to guess what rhythm was being played on the steady beat of the Kendang Ibu. Nonetheless, while not necessarily being able to identify the name of the performer, Sundanese Pencak Silat musicians and movement artists do hear the punches and the kicks when they listen to Pencak Silat music. This skill is visible through the gestures and onomatopoeic verbalisations they perform while listening to Pencak Silat recordings (i). I would not rule out the possibility that some audience members who frequently watch Pencak Silat performances could also accurately interpret the sounds. These sounds, and the reaction they can evoke, are clues into what might be going on inside the encultured brain.

My experience with Pak Darman has instilled a deep-seated desire to perform a Calvo-Merino et al. (2004) type experiment where music from Capoeira and Pencak Silat was used to study its effect on the brain. Pencak Silat music might elicit a strong response in mirror neurons and possibly the visual areas of the occipital lobe. Capoeira music, (which largely guides the movement as opposed to following the movement), may in fact be stimulating deeper brain structures (ii).

Most Pencak Silat practitioners are either musicians or movement performers. Musicians may have some experience of the movement, but the movement artists can not always play the music. Most experienced Capoeira practitioners, on the other hand, are able to play the music and perform the movement.  “SIGH” The experimental possibilities entice me! An experiment studying their encultured response to ecologically valid stimuli would be an absolute dream for any anthropologically inclined neuroscientist! Or any neurologically inclined anthropologist for that matter!

(i) During my fieldwork, I never asked for people to perform what they understood of Pencak Silat recordings. I simply watched the natural reaction of people who were listening to Pencak Silat recordings. It was obvious that they could hear where punches and kicks were placed in the music because they would often match loud hits of the Kendang with small gestures (similar to what contemporary dancers might call ‘blocking the movement’, where the movement is gestured but not performed in full) or with verbalised sounds that indicated they could feel the inference of the drum noise. This was an inspiring finding for me. The music of Pencak Silat follows the movement. Therefore, it means that the musicians successfully mimic and give life to the movement, because people can hear the movement through the music.

Sidenote: My physical reaction to Capoeira music as a Capoeirista is not to hear punches and kicks, but to feel a guiding rhythm that makes me want to move in a particular fashion. Capoeira music largely guides the movement. To an Angola rhythm I lower my centre of gravity and play with my movement, breaking it up and joking with it; while a Regional rhythm inspires me to move fast and thus bringing my centre of balance higher while swinging my arms faster.