Created by RPM at Evolgen

During our panel at the American Anthropology Association last year, Prof. Naomi Quinn warned that ‘a flowchart is not a theory.’ She stressed the limits to the explanatory power of a simple diagram; her skepticism, of course, is entirely warranted.

But since I was one of the prime offenders with the explanatory flowchart, and I seem to be using them more and more, I wanted to offer a stalwart defense of the use of flowcharts and diagramming in neuroanthropology, especially as both contribute to the practice of partial explanation. So, to pick up a theme from a number of my posts, ‘yes-you’re-right-but-I-still-disagree,’ here’s why I find flowcharts particularly useful and think anthropologists should be doing a lot more diagramming to highlight complex patterns of causation, situating more broadly the parts of complex systems that they are exploring.

But before I go any further, I need to direct all our readers to the recent announcement of the first Neuroanthropology conference which Daniel posted. Although I want to post, I feel like I also want to keep drawing attention to this announcement. But on with it…

As with all of her comments, I felt that Prof. Quinn cut to the quick, highlighting an issue in a cautionary fashion rather than rejecting specific arguments our panelists were making (at least I don’t think she was just calling me out…). In the case of flowcharts, Prof. Quinn suggested that diagramming relationships was a preliminary step, not a final goal – at least that’s one of the ways that I took her comments – and I agree.

END_OF_DOCUMENT_TOKEN_TO_BE_REPLACED 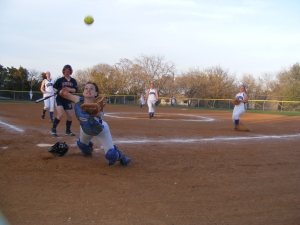 Dan Peterson, probably my favourite blogger on sports science, has a recent piece in Science Daily on How Baseball Players Catch Fly Balls. He usually posts on his excellent blog, Sports Are 80 Percent Mental. His post, as usual, is excellent, but I wanted to take issue with the slightest of details (because that’s just how I am): why do novice outfielders often take a step forward when the crack of a bat and the launch of a ball indicates that a fly ball has just been hit in their direction?

As a former and largely inept outfielder for the Ascension Catholic Church ‘Steamrollers,’ 2nd grade and under team (I was more of a junior soccer player), I well remember our coach, Dr. Wickersham, telling us repeatedly, and to little effect, ‘don’t start running forward until you know the pop-up is going to fall in front of you.’ I also clearly remember the sinking feeling when, after failing to heed his advice, a fly ball flew over my head as I charged toward it, ultimately landing almost precisely where I had been standing the instant that ball was hit.

Peterson discusses a recent paper in the journal, Human Movement Science, ‘Catching fly balls: A simulation study of the Chapman strategy,’ by Dimant Kistemakera and colleagues. Kistemakera and his team set out to test the slight variations between the trajectories fielders took when running to intercept a fly ball, and the trajectories predicted by Seville Chapman’s ‘strategy’ of using the acceleration of the ball in one’s vertical field to control whether one was too close or too far from home plate to make the catch.