And Pinky too! The “Parts of the Brain” song!

That’s the title of a report over at Science Daily.  A survey of 34 sex therapists found: “The average therapists’ responses defined the ranges of intercourse activity times: ‘adequate,’ from 3-7 minutes; ‘desirable,’ from 7-13 minutes; ‘too short’ from 1-2 minutes; and ‘too long’ from 10-30 minutes.”  The researchers Eric Corty and Jenay Guardiani conclude, “Unfortunately, today’s popular culture has reinforced stereotypes about sexual activity. Many men and women seem to believe the fantasy model of large penises, rock-hard erections and all-night-long intercourse.”

For a much funnier take on the same phenomenon, here’s a YouTube music video, “Ooh Girl” – An Honest R & B Song. You can also check out our comprehensive sex round up, including the very funny Business Time video, and Greg’s in-depth post, What do those enigmatic women want? 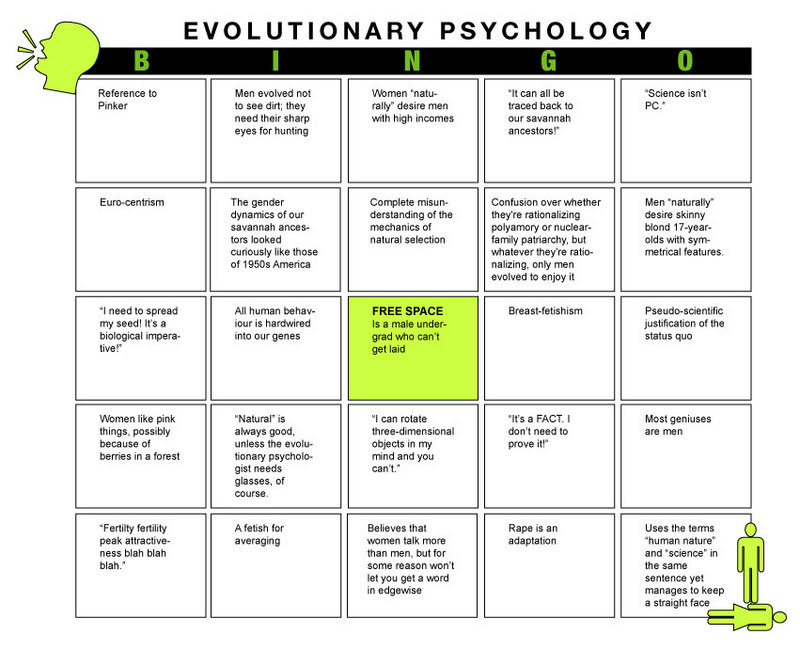 Alex Golub, one of the prime movers at Savage Minds, posted a link to an ‘Evolutionary Psychology’ bingo card that’s worth a chuckle.

I enjoyed the bingo card because it is such a great condensation of the usual hackneyed bits that crop up in conversations involving ‘evolution’ and ‘psychology,’ often with people who have serious interest in and understanding of neither evolutionary theory nor psychology. I’m not surprised that untrained individuals subscribe to evolutionary psychology (‘women like men who are tall because they could see prey farther off in the grasslands…’). After all, people close to me (who will remain unnamed) believe that one must inherit every trait or characteristic, however minor, from some relative, even if they are only related at a distance (‘you must get your love of traveling from your father’s brother…’) and into forms of ethnic personality theory (‘Italians are so expressive; Latins are so passionate…’).

The point of criticizing these trite versions of evolutionary psychology, for me, is not to throw out baby, bath water, and basin, but to really expose when pernicious sloppy thinking is masquerading as ‘science,’ especially under the guise of psychology and evolution. For whatever reason — probably because they have a sheen of ‘naturalness’ and being above criticism — these rubrics have become touchstones for some of the most retrograde thinking about sexuality, gender relations, ‘race,’ and other issues. The only way to truly engage them is to offer better accounts of both evolution and human psychology.

So in the meantime, I’m printing out my bingo card for the next salvo from the evolutionary psychologists.