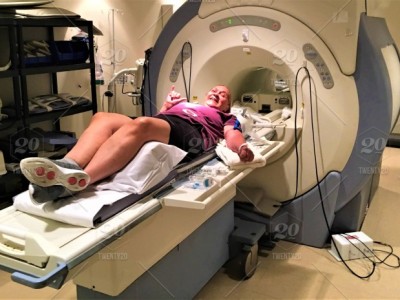 How to Interpret Resting-State fMRI: Ask Your Participants

Resting-state fMRI (rsfMRI) reveals brain dynamics in a task-unconstrained environment as subjects let their minds wander freely. Consequently, resting subjects navigate a rich space of cognitive and perceptual states (i.e., ongoing experience). How this ongoing experience shapes rsfMRI summary metrics (e.g., functional connectivity) is unknown, yet likely to contribute uniquely to within- and between-subject differences. Here we argue that understanding the role of ongoing experience in rsfMRI requires access to standardized, temporally resolved, scientifically validated first-person descriptions of those experiences. We suggest best practices for obtaining those descriptions via introspective methods appropriately adapted for use in fMRI research. We conclude with a set of guidelines for fusing these two data types to answer pressing questions about the etiology of rsfMRI.

This report by the Lancet Commission on Public Policy and Health in the Trump Era assesses the repercussions of President Donald Trump’s health-related policies and examines the failures and social schisms that enabled his election. Trump exploited low and middle-income white people’s anger over their deteriorating life prospects to mobilise racial animus and xenophobia and enlist their support for policies that benefit high-income people and corporations and threaten health.

His signature legislative achievement, a trillion-dollar tax cut for corporations and high-income individuals, opened a budget hole that he used to justify cutting food subsidies and health care. His appeals to racism, nativism, and religious bigotry have emboldened white nationalists and vigilantes, and encouraged police violence and, at the end of his term in office, insurrection. He chose judges for US courts who are dismissive of affirmative action and reproductive, labour, civil, and voting rights; ordered the mass detention of immigrants in hazardous conditions; and promulgated regulations that reduce access to abortion and contraception in the USA and globally.

Although his effort to repeal the Affordable Care Act failed, he weakened its coverage and increased the number of uninsured people by 2·3 million, even before the mass dislocation of the COVID-19 pandemic, and has accelerated the privatisation of government health programmes. Trump’s hostility to environmental regulations has already worsened pollution—resulting in more than 22 000 extra deaths in 2019 alone—hastened global warming, and despoiled national monuments and lands sacred to Native people. Disdain for science and cuts to global health programmes and public health agencies have impeded the response to the COVID-19 pandemic, causing tens of thousands of unnecessary deaths, and imperil advances against HIV and other diseases. And Trump’s bellicose trade, defence, and foreign policies have led to economic disruption and threaten an upswing in armed conflict.

What is Complexity Science?
Github primer on the topic. Here’s the intro statement:

Complexity science, also called complex systems science, studies how a large collection of components – locally interacting with each other at small scales – can spontaneously self-organize to exhibit non-trivial global structures and behaviors at larger scales, often without external intervention, central authorities or leaders. The properties of the collection may not be understood or predicted from the full knowledge of its constituents alone. Such a collection is called a complex system and it requires new mathematical frameworks and scientific methodologies for its investigation.

Beside the dynamic website, you can get a more linear pdf of the materials here.

You are likely highly literate. As you learned to read, probably as a child, your brain reorganized itself to better accommodate your efforts, which had both functional and inadvertent consequences for your mind.

So, to account for these changes to your brain—e.g, your thicker corpus callosum and poorer facial recognition—we need to ask when and why did parents, communities, and governments come to see it as necessary for everyone to learn to read. Here, a puzzle about neuroscience and cognition turns into a historical question.

Of course, writing systems are thousands of years old, found in ancient Sumer, China, and Egypt, but in most literate societies only a small fraction of people ever learned to read, rarely more than 10%. So, when did people decide that everyone should learn to read? Maybe it came with the rapid economic growth of the Nineteenth Century? Or, surely, the intelligentsia of the eighteenth-century Enlightenment, imbued with reason and rationality, figured it out?

No, it was a religious mutation in the Sixteenth Century. After bubbling up periodically in prior centuries, the belief that every person should read and interpret the Bible for themselves began to rapidly diffuse across Europe with the eruption of the Protestant Reformation, marked in 1517 by Martin Luther’s delivery of his famous ninety-five theses. Protestants came to believe that both boys and girls had to study the Bible for themselves to better know their God. In the wake of the spread of Protestantism, the literacy rates in the newly reforming populations in Britain, Sweden, and the Netherlands surged past more cosmopolitan places like Italy and France. Motivated by eternal salvation, parents and leaders made sure the children learned to read.

Low-level descriptions of interaction dynamics have been canonically approached by cognitive neuroscience through a representation-oriented and inference-based perspective, leading to a stable paradigmatic plateau, that no longer allows further construction of a completely coherent semiotic framework capable of accounting for currently unobserved characteristics of social cognition, which is forcibly situated and mostly occurs in interaction. Social contexts are saturated with information that remains invisibilized because of the use of mutually incommensurable conceptual metaphors throughout contemporary scientific discursive practices, despite the embodied turn led by 4E Cognition. A new turn toward realist ontology and epistemology is thus rendered as necessary to inform the gaps within cognitive neuroscience and ground its currently unfulfilled interdisciplinarity. Examples are drawn from research on language to make the case for each argument.

How to Write a Novel, According to 10 Really Good Novelists
Really just tips for writing…

Don’t overcomplicate it:
“Keep it simple: complexity is the enemy. Task yourself narratively, eg ‘Tomorrow I have to write a particular scene’, rather than ‘Tomorrow I must write 800 words’. Plot can be structured as: situation, complication, new equilibrium. And this applies to scenes as well as whole books: the new equilibrium is the hook for the next scene. Verbs are very important, that’s where the action is. Metaphorise them if possible. Write: ‘The red-haired man shouldered his way through the door’; not: ‘The big-shouldered, red-haired man pushed through the door.'”

Before Covid-19, body budgeting in modern life was already treacherous. Many of us were sleep deprived, stressing out on social media, not exercising enough and eating pseudo-foods loaded with budget-warping refined sugar and bad fats. The pandemic exacerbated these problems, along with financial worries, parenting pressures, social isolation and, of course, the fear of dying. Depression rates doubled in the UK and tripled in the US. Overall, our body budgets are seeing more withdrawals and fewer deposits.

But in these challenges we face we may discover seeds of resilience, with neuroscience as the flashlight. Many things in the outside world can nudge (or shove) your body budget, and that includes other human beings. In a very real, biological way, we are connected to one another through body budgeting. Friends, family and strangers can do and say things that send your spider sense creeping (or careening) this way or that, and you return the favour. In a moment of trust or affection, for example, heart rates or breathing may synchronise. When you raise your voice, or even your eyebrow, you might affect the chemicals carried in someone else’s bloodstream. These sorts of physical connections happen between infants and their caregivers, between therapists and their clients, among friends or lovers and even among people moving together in a yoga class or singing in a choir. People notice these body-budget tweaks mainly as changes in mood.

Structured Flows on Manifolds as guiding concepts in brain science

Any discussion of brain repair, rehabilitation, and functional recovery imperatively requires a working definition of “function” (Jirsa et al. 2019). If such definition is not explicitly provided, which is more common than not, then the precedent statement still remains valid and is implied by the choice of methods applied in the investigation. An illustrative and recent example is the use of resting state paradigms in modern neuroscience, in which spa-tiotemporal brain activity is recorded using neuroimaging techniques such as functional MRI or EEG and then cast into a measure, e.g., functional connectivity, which captures the Pearson correlation of brain activations. Measures assign a value on the relationship between two brain regions in a systematic way, which implicitly evokes an underlying model and understanding of brain function.

Functional connectivity assumes that the co-variation of brain activations in time is related in a meaningful way to brain function. What does meaningful refer to in this case? Here meaning can be assigned in two ways. Either it can be linked to a causal description of brain activity, as only the latter provides us with entry points for interventions in case of brain dysfunction, and ultimately brain repair. The juxtaposition of empirical brain data and a causal description thereof is commonly performed through the building of a mechanistic brain model. Once one or multiple key mechanisms are identified, then the actual confrontation between empirical data and model is made by the parameters in the model. In fact, this is what any scientific interrogation reduces to at this stage.

The assignment of values (whether through explicit numbers, parameter ranges, or co-dependent subsets) to model parameters establishes the critical link between our understanding (aka the model) and the real-world (aka the data). It will generally not be unique, but degenerate in the sense that the brain exhibits the one-to-many and many-to-one behavior well-known from complex systems. Virtually indistinguishable network activity patterns can for instance arise from many distinct biophysical mechanisms

The Mind at Work: Lisa Feldman Barrett on the metabolism of emotion

“Essentialism is really at the heart of many ills in our society,” Barrett tells me, looking Vermeer-esque against a dramatic velvet curtain on our Zoom call. “Essentialism is the belief that a category of things share a particular nature because they share a deep, immutable core, an unchanging essence.” Racism, sexism, and snobbery are all forms of essentialist bias that hinge on this fixed mindset. They also assume, Barrett says, “that a visible feature (like skin tone, or a vagina, or a certain type of car) is symbolic for something else, the deeper essence, that makes a person the type of person they are.”

Essentialism is also behind the classical view of emotion that Barrett encountered as a psychology student.

Hurlburt had envisioned a way to accurately sample others’ random inner experiences. Today a professor of psychology at the University of Nevada, Las Vegas, he’s been honing the technique ever since.

Hurlburt calls his methodology Descriptive Experience Sampling (DES), and it works by sampling the inner thoughts of a given interviewee during those moments when a beeper randomly goes off. After extracting the contents of inner experience from countless interviews, Hurlburt has defined an array of phenomena typically shared by humans – auditory and visual imagery, emotion, awareness of real stimuli and a category of thoughts that occur without words, images or symbols of any kind. The main contribution here, though, is actually DES itself. Before its inception, introspective methods had been shunned for decades, if not centuries, as being too highly influenced by bias to be taken seriously. Now, with DES, Hurlburt believes in the possibility of obtaining unbiased, accurate snapshots of inner experience that includes inner speech.

Freed from the mundane confines of a laboratory, the data come from ‘the wild’, as Hurlburt puts it.