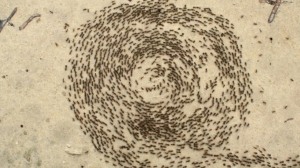 America Is Trapped in a Pandemic Spiral

Army ants will sometimes walk in circles until they die. The workers navigate by smelling the pheromone trails of workers in front of them, while laying down pheromones for others to follow. If these trails accidentally loop back on themselves, the ants are trapped. They become a thick, swirling vortex of bodies that resembles a hurricane as viewed from space. They march endlessly until they’re felled by exhaustion or dehydration. The ants can sense no picture bigger than what’s immediately ahead. They have no coordinating force to guide them to safety. They are imprisoned by a wall of their own instincts. This phenomenon is called the death spiral. I can think of no better metaphor for the United States of America’s response to the COVID-19 pandemic.

The U.S. enters the ninth month of the pandemic with more than 6.3 million confirmed cases and more than 189,000 confirmed deaths. The toll has been enormous because the country presented the SARS-CoV-2 coronavirus with a smorgasbord of vulnerabilities to exploit. But the toll continues to be enormous—every day, the case count rises by around 40,000 and the death toll by around 800—because the country has consistently thought about the pandemic in the same unproductive ways.

When the World Isn’t Designed for Our Bodies

If we’re overly besotted with objects that promise assistance, maybe that’s because our default objects—the givens of the built world—can seem so incompatible with our needs. Look down. Your chair, Hendren declares, is murdering you. (The historian Galen Cranz has noted correlations between chair use and “back pain of all sorts, fatigue, varicose veins, stress, and problems with the diaphragm, circulation, digestion, and general body development.”) Yet long stretches of sitting are a societal norm. Why? Hendren invokes the chair’s historical function: in many cultures, including corporate culture, throne-like seats symbolize power and status. We may also be drawn to chairs’ animal charisma, to their torsos, bottoms, and four sturdy legs.

Regardless, Hendren argues, we could be sitting so much more comfortably if furniture makers were to attend as closely to matters of substance and sustainability as they do to matters of style. Disability activists, of course, have been making such arguments for years. One corollary of universal design—the idea that my perfect chair equals your perfect chair—states that improvements undertaken with disabled bodies in mind are likely to benefit everyone. (The telephone, for instance, emerged out of Alexander Graham Bell’s work with deaf students.)

Hendren gives universal design a hearing, but she would rather remain alert to difference. The book thus lingers over “diffuse design,” which thrives on grassroots connections. In the diffuse model, artists, guided by local desires, make bespoke modifications to a received archetype.

University of Michigan environment dean Jonathan Overpeck, a climate scientist, said that in 30 years because of the climate change already baked into the atmosphere “we’re pretty much guaranteed that we’ll have double what we have now.”

I imagined settling down in my 30s or 40s with kids, a mortgage and so on. Or maybe I wouldn’t. Maybe my friends’ children would call me Uncle Elliot as their parents gathered in the kitchen looking slightly concerned about their single 45-year-old friend about to set off travelling around Mongolia. Either way, growing older with my mates and living my life to the full was always my ambition.

Of course, the second part of this storyline won’t be written now. It’s a shame I don’t get to see what happens. But everybody dies, and there will always be places and experiences missing from anyone’s life – the world has too much beauty and adventure for one person to see. I will miss marriage or children, blossoming careers and lives moving on. But I’m not alone in my life being cut short, and I think my time has been pretty good.

Is America in the Early Stages of Armed Insurgency?

Meanwhile, a powder keg is building. FBI background checks for gun sales hit 3.9 million in June—an all-time high. Many of them were for first-time gun buyers—by definition untrained, possibly rash in their actions. An estimated 20 million Americans carry a gun when they leave their homes. It takes just a few trigger-pullers to set off a conflagration; even in intense insurrections, such as the postwar rebellion in Iraq, only 2 percent of insurgents actually fired their weapons.

Kilcullen sees a pattern similar to the patterns that precipitated insurgencies in Colombia, Libya, and Iraq. The key factor is the rise of fear. He cites Stathis Kalyvas’ book The Logic of Violence in Civil War as observing that fear, not hate, drives the worst atrocities. “Every civil war and insurgency of the last 50 years has been driven by fear,” Kilcullen told me. Today’s politics and social tensions are dominated by three fears: fear of other social groups, fear that those other groups are encroaching on one’s territory, and fear that the state no longer has the ability to protect the people.

Things do not have to get worse. “Incipient insurgency” doesn’t mean “inevitable insurgency.” We are still in the very early phase of this rampage—a “pre-McVeigh moment,” as Kilcullen puts it. And the extent of disorder has been exaggerated, usually for political motives. When violence has occurred during protests, it has been confined to just a few blocks; it hasn’t spread throughout a city. Contrary to Trump and other Republican politicians, New York is not a “hellscape,” Portland is not “ablaze all the time,” and Chicago is not more dangerous than Afghanistan.

How to Deal With the Anxiety of Uncertainty

“Waiting periods are marked by two existentially challenging states: We don’t know what’s coming, and we can’t do much about it,” Sweeny explains. “Together, those states are a recipe for anxiety and worry. People would often rather deal with the certainty of bad news than the anxiety of remaining in limbo.”

That’s what researchers at three institutions in the UK found in a 2013 experiment, when they attached electrodes to 35 subjects and asked them to choose between receiving a sharp shock immediately or waiting for a milder one. The vast majority chose the more painful option, just to get it out of the way. “It’s counterintuitive,” admits Giles Story, one of the academics behind the study. “But it’s a testament to how anxiety-inducing and miserable it can be to have things looming in the future.”

How Scientists Discovered the Staggering Complexity of Human Evolution

From the rich assortment of fossils and artifacts recovered from around the world in the past century, however, paleoanthropologists can now reconstruct something of the timing and pattern of human evolution. The finds clearly show that this single-file scheme is no longer tenable. Evolution does not march steadily toward predetermined goals. And many hominin specimens belong not in our direct line of ancestry but on side branches of humankind—evolutionary experiments that ended in extinction.

From the outset, our defining traits evolved not in lockstep but piecemeal. Take our mode of locomotion, for example. H. sapiens is what anthropologists call an obligate biped—our bodies are built for walking on two legs on the ground. We can climb trees if we need to, but we have lost the physical adaptations that other primates have to arboreal life. Fragmentary fossils of the oldest known hominins—Sahelanthropus tchadensis from Chad, Orrorin tugenensis from Kenya and Ardipithecus kadabba from Ethiopia—show that our earliest ancestors emerged by around seven million to 5.5 million years ago. Although they are apelike in many respects. all of them exhibit characteristics associated with walking on two legs instead of four. In Sahelanthropus, for example, the hole in the base of the skull through which the spinal cord passes has a forward position suggestive of an upright posture. A bipedal gait may thus have been one of the very first traits that distinguished hominins from ancestral apes.

Excellent thread on advances in research on human evolution from a premier science writer – she highlights all the pieces she has written that provide an excellent recounting of the explosion in research over the past 20 years.

In the Animal Kingdom, the Astonishing Power of the Number Instinct

If these bacteria are in dilute water solutions (where they are alone), they make no light. But when they grow to a certain cell number of bacteria, all of them produce light simultaneously. Therefore, Vibrio fischeri can distinguish when they are alone and when they are together.

Somehow they have to communicate cell number, and it turns out they do this using a chemical language. They secrete communication molecules, and the concentration of these molecules in the water increases in proportion to the cell number. And when this molecule hits a certain amount, called a quorum, it tells the other bacteria how many neighbors there are, and all bacteria glow. This behavior is called “quorum sensing”: The bacteria vote with signaling molecules, the vote gets counted, and if a certain threshold (the quorum) is reached, every bacterium responds.