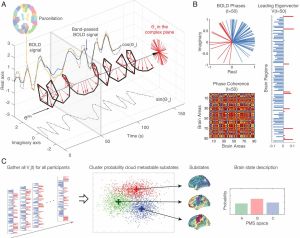 I want to cover two different open-access papers here, both of which represent advances in how we can study and understand how the brain achieves complex outcomes using different levels of interaction, from neurotransmitter systems, to connections among brain areas, to how networks work as systems. The first is a neuroscience-heavy paper, the second more on philosophy of science and complexity. So a good pairing!

Remarkable progress has come from whole-brain models linking anatomy and function. Paradoxically, it is not clear how a neuronal dynamical system running in the fixed human anatomical connectome can give rise to the rich changes in the functional repertoire associated with human brain function, which is impossible to explain through long-term plasticity. Neuromodulation evolved to allow for such flexibility by dynamically updating the effectivity of the fixed anatomical connectivity. Here, we introduce a theoretical framework modeling the dynamical mutual coupling between the neuronal and neurotransmitter systems. We demonstrate that this framework is crucial to advance our understanding of whole-brain dynamics by bidirectional coupling of the two systems through combining multimodal neuroimaging data (diffusion magnetic resonance imaging [dMRI], functional magnetic resonance imaging [fMRI], and positron electron tomography [PET]) to explain the functional effects of specific serotoninergic receptor (5-HT2AR) stimulation with psilocybin in healthy humans. This advance provides an understanding of why psilocybin is showing considerable promise as a therapeutic intervention for neuropsychiatric disorders including depression, anxiety, and addiction. Overall, these insights demonstrate that the whole-brain mutual coupling between the neuronal and the neurotransmission systems is essential for understanding the remarkable flexibility of human brain function despite having to rely on fixed anatomical connectivity.

And how they made that model statistically tractable:

We fitted the mutually coupled whole-brain model using our framework of describing a brain state as an ensemble or probabilistic “cloud” in a given state space (29). This cloud is of course not clustered into discrete states (30), but it has been shown that clustering can nevertheless be useful in providing so-called “metastable substates” that can significantly distinguish between brain states (31, 32). A brain state is determined by a collection of metastable substates, i.e., of time-varying pseudo-states resulting from the clustering process (33⇓–35).

Here, we have shown how a dynamic mutually coupled whole-brain model can address the major challenge in neuroscience, which is to explain the paradoxical flexibility of human brain function despite the reliance on a fixed anatomical connectome. One of the most important elements in this flexibility is the way that the fixed connectome can be modulated by neuromodulators to selectively change the balance of the excitation and inhibition of individual brain regions. Here, we modeled the dynamical mutual coupling between neuronal and neuromodulator systems at the whole-brain level…

Overall, the results show that the interaction between these dynamical systems is fundamental for explaining the empirical data. In other words, the dynamic mutual interaction between neuronal and neuromodulator systems at the whole-brain level is important to fully explain the functional modulation of brain activity by psilocybin, a powerful psychedelic drug, acting on the serotonin system.

And the second article is On the Nature of Explanations Offered by Network Science: A Perspective From and for Practicing Neuroscientists by Maxwell A. Bertolero and Danielle S. Bassett.

And a key section:

Returning to the dirt bike analogy, force being transferred from the front sprocket to the rear sprocket via the chain is a relatively high‐level explanation that does not involve the individual links of the chain or the number of teeth on the sprocket, which determine how force is transferred, but it is also a lower level explanation than one addressing how the chassis and engine work together to propel the bike across dirt. Despite differences in scale, all three explanations can be mechanistic explanations. Similarly, an explanation of brain function involving multiple brain regions communicating via white matter tracts and coordinated activity would not necessarily be any less mechanistic than an explanation involving multiple cortical neurons communicating via axons and synapses. For example, consider explanations of various features of visual perception. At a microscale, primary visual cortex—the earliest cortical area associated with the perceptual of visual stimuli—contains neurons that temporally coordinate their activity patterns to encode the orientation of a stimulus (Gray & Singer, 1989). At a macroscale, information travels between the visual cortex and the posterior parietal cortex (Andersen, Snyder, Bradley, & Xing, 1997), the latter mediating selective attention to motion by modulating the effective connectivity from early visual cortex to the motion‐sensitive areas in visual cortex (Friston & Büchel, 2000). In both cases, the functional mechanism underlying the cognitive process lies in neurons, or groups of neurons, communicating via axons and coordinated activity.

The key differences are (a) the scale of the explanation, which does not inherently make an explanation more or less mechanistic, and (b) the specific function that we wish to explain (orientation tuning or motion detection), which can determine the scale of explanation that is most appropriate. While this distinction has been noted by philosophers (Craver, 2007), neuroscientists tend to favor the scale of their work as the scale with strongest mechanistic explanations. This bias is in some sense quite rational; neuroscientists should work at the scale they believe is the most fruitful, and a good explanation at one scale need not derive from a good explanation at another scale (Craver, 2007). However, a key problem with hegemony of a single scale is that good mechanistic explanations in neuroscience can also integrate across all scales, interdigitating data across various methods (Craver, 2007). Thus, we must be open to explaining the brain at each scale mechanistically, and also deriving explanations of brain mechanisms that bridge phenomena across two or more scales.