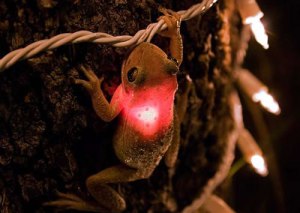 I took the dogs outside this morning, and the air turned liquid. Drops of rain fell in the trees, Tampa’s humidity condensed amid leaves and branches. The stars gleamed hazy through the trees, and the two dogs sniffed their way around the yard. A frog called beside the house. I walked down the driveway, looked at the other neighbors’ trash, and still I smiled.

I found this apropos photo, a Cuban tree frog photographed by James Snyder in southern Florida, and originally featured on National Geographic’s Daily Dozen. Find out what he had to say about the shot over at Neatorama.

This week I’ve done my favs, then an excellent selection on culture and cognition. After that some health, some anthropology, some cognition, some A. afarensis tool use. Cannabis and the Last Word, a poem this time, finish it off.

I had a lot of help from my new graduate assistant Ethel Saryee in putting this round up together. So thanks to her!

Brian Mossop, The Brains of Our Fathers: Does Parenting Rewire Dads?
Uh oh, my sons have reprogrammed me! Must be why I love playing video games with them… (Not sure my wife will buy that…) Very nice piece on neural plasticity, development, and father-son relationships over at Scientific American

Melody Dye, A Thinking Machine: On Metaphors of the Mind
Are we pre-programmed spreadsheets or search algorithms? Metaphors matter, because they can dictate our assumptions.

Paul Thagard, Why Cognitive Science Needs Philosophy and Vice Versa
Cognitive science and philosophy NEED each other. In this article (pdf), critiques of rationalist, analytic, and postmodern approaches while talking about how to do synthesis.

Awkward Family Photos – Hall of Fame
Oh, these made me laugh!

PZ Myers, Ray Kurzweil Does Not Understand the Brain
Pharyngula takes the computer guru to task for claiming he’ll be able to reverse engineer the brain in a decade. My favorite line:

To simplify it so a computer science guy can get it, Kurzweil has everything completely wrong. The genome is not the program; it’s the data. The program is the ontogeny of the organism, which is an emergent property of interactions between the regulatory components of the genome and the environment, which uses that data to build species-specific properties of the organism.

Vaughan Bell, A Gut Reaction to Moral Transgressions
Mind Hacks on how gut feelings and reactions can be the “unrecognised basis of moral judgements and social customs”

David Harvey, RSA Animate – Crises of Capitalism
An animated Marxist perspective! The graphical animation alone is worth it, but Harvey’s analysis is as illustrative as the drawings.

Psychology around the World

Ed Yong, Genes and Culture: OXTR Gene Influences Social Behaviour Differently in Americans and Koreans
Not Exactly Rocket Science on some intriguing research: “In both cases, the G carriers were more sensitive to the social conventions of their own cultures. But the differences between these conventions led to different behaviour.”

Natasha Mitchell, Challenging Stereotypes: Culture, Psychology and the Asian Self (Part 1 of 2)
Good program over at All in the Mind – not just the collectivist/individual dichotomy

Sweet, M., Heyman, G., Fu, G., & Lee, K., Are There Limits to Collectivism? Culture and Children’s Reasoning about Lying to Conceal a Group Transgression
Is a child from individualistic culture or collective culture more prone to lie for a group?

Andrew Solomon, If You’ve Ever Been Depressed, Been to Africa, Been Depressed in Africa, or Just Really like the Song “Chariots of Fire,” Listen to This
Humorous cross- cultural comparison of depression and treatment and why the U.S. treatments do not work.

John Lehrer, Why Russians Don’t Get Depressed
Non-Russians get depressed due to brooding without self-distance.

Ted Kaptchuk, Catherine Kerr, and Abby Zanger, Placebo Controls, Exorcisms, and the Devil
Not every day you see a title like that in the Lancet! And it’s full access too! How exorcisms led to placebo-controlled studies, in this case “trick trials” – a nice piece of cultural history

Centre for Evidence Based Medicine, CEBM Levels of Evidence – Introduction
The Centre has introduced a new table summarizing how to approach different levels of evidence. This post introduces their thinking, and they are looking for feedback. Here is the table itself. Hopefully some medical anthropologists will chime in. At the same time, I wonder what such a table would look like as devised by an anthropologist or qualitative researcher.

Dr. X, Public Health: 1918
A Vintage poster for venereal disease from Dr. X’s Free Associations. Not every day that you see a half-naked woman with a vulture on a chain depicting the clap.

Rick Holden and Tony Waters, Aspirations to Practicing Anthropology Are Okay!
A must read for all aspiring anthropologists, a reality check of sorts.

Ryan Anderson, Atlanta Airport
Ryan took a beautiful photo in black-and-white – see it over at Ethnografix.

Alix Spiegel, When Did We Become Mentally Modern?
The discovery of early artifacts used as symbols in South Africa.

Linda Greenhouse, Hiding in Plain Sight
Jump to the middle, where there is analysis of changes in gender roles and marriage, and how that relates to the present legal debate over gay marriage – a quite insightful take on Judge Vaughn Walker’s ruling that overturned Proposition 8

Alasdair Wilkins, Deadly Stomach Bacteria Holds Remnant of the World before DNA
Ancient RNA – it really could do it all!

Dinesh Dutt, Behavioral Sciences Are WEIRD (and MYOPICS)
I quite like this piece that builds off Greg’s WEIRD essay to explore predictably irrational, differences in behavior, SIDS and poverty

Scicurious, Conversations Really Do Take Two
Nice summary of the research showing the neural linking of two people actively engaged in a conversation

Rebecca Saxe, How We Read Each Other’s Minds

The A. afarensis Tool Use Discovery/Controversy

A team with a USF geologist discover cut marks on a fossilized rib that may signify stone tool use dating back 3.4 million years, much earlier than we thought in the human lineage. Should we re-configure our images of Lucy and now place a tool in her hand? Or are the marks simply those of a carnivorous croc?

Greg Laden, The Earliest Known Use of Flaked Stone Tools by Hominids?
Greg takes into some of the intricacies of determining tool marks on bone

Annette Heist, Study Suggests Earlier Meat Eating In Hominids
Listen to one of the main scientists involved in the work speak on Science Friday

Kambiz Kamrani, A Curious Look At The 3.39 Million Year Old “Stone Tool Markings” From Dikika, Ethiopia
Yes, the “croc did it” piece

Mark Kleiman, What to Do About Drugs (Abridged)
And why it should be done.

Mark Kleiman, Against Commercial Cannabis
Why the Grow Your Own Policy makes sense.

This selection is from Wallace Steve’s Esthétique du Mal:

The shadows of his fellows ring him round
In the high night, the summer breathes for them
Its fragrance, a heavy somnolence, and for him,
For the soldier of time, it breathes a summer sleep,

In which his wound is good because life was,
No part of him was ever part of death.
A woman smoothes her forehead with her hand
And the soldier of time lies calm beneath that stroke.