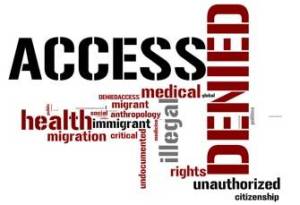 Access Denied is a great new anthropology blog on immigration and health. In particular, the editorial team focuses on the “vital global health challenge: unauthorized migrants’ and immigrants’ lack of access to health care services.”

As they write about their initiative:

Do unauthorized im/migrants have a right to health? To medical care? To publicly funded care? In this blog, medical anthropologists host a lively conversation among scholars, activists, policymakers and others on the complex and contentious issue of unauthorized migration and health. We approach the issue comparatively, with attention to power, cultural context, and historical depth. Through empirically grounded, critical dialogue, we aim to rethink current debates and inform policy about unauthorized migration and the right to health care.

Recent posts include What do Haitian Earthquake Survivors and the Super Bowl Have in Common?, which addresses the mounting controversy over stopping survivors of the Haitian earthquake from entering Florida to receive urgently needed health care, and Chutes and Ladders: Comprehensive Immigration Reform and Health Care Access for Undocumented Workers, which provides a long-term view of immigration and health using the lens of Mexican illegal immigrants to Idaho.

The Access Denied team also puts together regular News Round Ups, with the most recent one delving into the serious problems surrounding deaths among immigrants held in custody by US Immigration and Customs Enforcement.

The overall site delivers a complete package, including an extensive working bibliography, a good list of web resources on immigration and health, and most importantly Access Denied’s recommendations for Action Steps you can take to address the problems surrounding immigration and health.

Other founding members include Nolan Kline, a graduate student at the University of South Florida, and Jessica Mulligan, a post-doc at the Holleran Center for Community Action and Public Policy. You can see the entire team here, including profiles of the founders and guest contributors.

Those guest contributors have included some outstanding senior people, including Didier Fassin, who just joined the prestigious Institute for Advanced Study at Princeton, on Illegal Immigrants as the Last Frontier of Welfare, and Peter Guarnaccia, Professor in Human Ecology at Rutgers, on Health Care Reform Is Intimately Linked to Immigration Reform.

For even more, go check out the new medical anthropology blog Access Denied.

Leave a Reply to ryan a Cancel reply