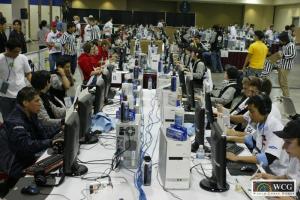 Great stuff covering the breadth of neuroanthropology – learning, research, addiction, art and criticism, and thinking about games and game design. One immersive round-up.

For our latest onsite, you can see Can Video Games Actually Be Good For You?, Robbie Cooper – Immersion, and the Contemporary Culture of Entertainment.

Also, the last round-up on video games, brain and psychology is one of our more popular posts, and includes links to more on-site stuff. Or simply check out our video game category.

Alvaro Pascual-Leone & Lotfi B. Merabet, Take Two Video Games and Call Me in the Morning
Scientific American article on how it can, with some quite context on how to think about plasticity, motivation, and virtuality.

Michael Abbott, Teach Me to Play
Great post at The Brainy Gamer about learning styles and game designs. See also his reporting from the Games for Change conference, Flashes of Light

Ben Silverman, Is Gaming Good for the Mind?
Certainly helps seniors with cognition. And it’s a commercial game, Boom Blox on the Wii.

Braid, A Short Essay about Serious Games
We just follow the yellow line… A critical take on what games teach us

Adam Bohanon, Computer-based Games and Knowledge Acquisition and Retention
A summary of a recent study – not really more effective than traditional approaches. Not worse either.

Amanda Lenhart, Teens, Video Games and Civics
A new Pew study is summarized. Virtually all American teens play, and the experience is rich and varied

Nick Yee, The Unbearable Likeness of Being
Reflections on embodiment in virtual worlds after ten years studying them, part of the Daedalus Project

Martin Klasen et al., Think Aloud during fMRI: Neuronal Correlates of Subjective Experience in Video Games
Pdf of a short article that outlines a quite intriguing method for matching fMRI work with participants voicing their thoughts as they play. Probably could be employed with a much wider range of activites.

Chris Lavigne, Why Video Game Research Is Flawed
Researchers don’t understand video games and so build bad studies that yield flawed results, or “What do 23 martial-arts fighters have in common with a talking Australian marsupial? According to one team of video game researchers, they’re identical.”

Diana @ CyberAnthro , The Information Needs of Gamers: A User Group Analysis
Information science, anthropology, and a gamer too – “Gamers as Collaborative Information Seekers, Consumers, and Producers”

Gonzalo Frasca, Etica y Videojuegos
Un blog en español! But in this case it’s about an English book, The Ethics of Computer Games, and you can even get the introduction as a pdf

Lucas @ EduRealms, A New Project – World of Warcraft In School
Yes, WoW is used for learning!

Dave Munger, Pathological Video Gaming in Kids: How Common Is It?
Nice summary and reflection on the recent research by Douglas Gentile, which indicated rather high levels of obsessive, detrimental gaming (8.5% of young gamers)

Educational Games Research, Video Game Addiction: Fact or Fiction
A reflection on the Douglas Gentile study, and on parents’ concerns vs. actual problems

Paddy Maguire, Compulsive Gamers ‘Not Addicts’
It’s a social problem, not a classic addiction, for most youth playing hours and hours

Farhad Manjoo, How I Got Addicted to Playing Games on My iPhone
Slate feature – “They’re Fast, They’re Cheap, and I’m Out of Control”. More about addiction in the popular sense.

John Lancaster, Is It Art?
Do video games count as art? Certainly a big industry, and an in/out social phenomenon, but is it art? Interesting piece at the London Review of Books

Keith Stuart, Evercracked! and the Best Videogame Documentaries Ever
It’s a short list but it’s what we’ve got

Roger Ebert, Games vs. Art: Ebert vs. Barker
The movie critic argues that games are not art: The vast majority of games “tend to involve (1) point and shoot in many variations and plotlines, (2) treasure or scavenger hunts, as in “Myst,” and (3) player control of the outcome. I don’t think these attributes have much to do with art; they have more in common with sports.”

Brian Crecente, The Death of (Video Game) Criticism
Arguing with Roger Ebert over at Kotaku

Clint @ Click Nothing, On Authorship
More arguing with Roger Ebert, in this case about what counts as art and authorship

Thinking about Games and Game Design

Michael Abbott, Would Someone Please Pass the Trine?
The Brainy Gamer celebrates a forthcoming game. “If, like me, you fancy yourself an amateur video game anthropologist, Trine (pronounced like ‘mine’) is a mini-compendium of genre and gameplay from the last 25 years.” So here’s a trailer:

John Gaudiosi, Are Our Games Alive?
Is it artificial life? If not, how soon? And I ask, with games that act as symbol system, do we just see them alive?

Brice Morrison, Why A Game Designer Outgrew Video Games
This designer wants games that appeal to intelligent adults, that go beyond just fun

Critical-Gaming Network, Game Design 101
Get an overview of the basics according to a classical game mechanics approach

Daniel Primed, Zelda: Twilight Princess – Conformity, Innovation and Relevancy
A great analysis of one boss battle, as well as the weight of legacy on the rest of the game

Clint @ Click Nothing, Live and Let Die
A prominent game designer promotes letting the play do the heavy lifting in games, not the narrative – the emotional dilemmas can be built in

Moving Pixels, Games as Language Systems
“Video games actually carry many of the expressive properties of language itself.”

Games for Change, G4C Festival Day One Summary and Day Two Summary
Get the wrap-up on a great conference!

International Hobo, A Game Has Never Made You Cry
Or narrow vs. wide definitions of games

7 thoughts on “Gaming Round Up – Learning, Research, Addiction and Design”