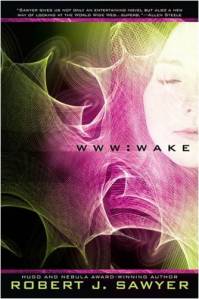 I just finished reading this book, and definitely enjoyed it – more for the ideas than for the writing, but then again, it’s not every day you find such a neuroanthropological tale! As for the story, it moves right along, so it’s a good summer read. As Publisher’s Weekly says, “Wildly thought-provoking.”

Here’s Sawyer’s tag: “The World Wide Web wakes up…” And while much of the story does revolve around artificial intelligence and how the Web might develop into an aware agent, the protagonist of the novel is Caitlin Decter, a blind teenager who is a math prodigy and internet whiz. That combination lets Sawyer explore neural plasticity (her visual cortex has mapped onto her navigation of the web) and Decter’s understanding and interactions with the emergent online being.

As Sawyer writes about Wake, “The World Wide Web will soon have as many connections as does the human brain. And, just as reflective, self-aware consciousness spontaneously emerged in Homo sapiens some 40,000 years ago so too might consciousness emerge in the vast network that is the Web.”

Cellular automata and emergence figure centrally in how Sawyer sees artificial intelligence organizing in a spontaneous manner on the Internet. That was a fun exploration of ideas, both about technology and about complexity – probably the part of the book that engaged me most. If you want a good explanation of cellular automata, especially as they relate to patterns and modeling, Cosma Shalizi provides an overview.

And while I deeply appreciated the appearance of a scientific book as a central part of the story – Julian Jaynes’ The Origin of Consciousness in the Breakdown of the Bicameral Mind by Julian Jaynes – that origin story has some serious problems.

I’ll talk more about those in a minute, but for now, you can read the opening chapters of WWW: Wake and visit the book site. You can also get the podcast of his talk at UPenn’s Center for Cognitive Neuroscience and listen to this refreshing radio interview with Sawyer. As he says there about Wake and doing the research behind it, “I loved it because it is so multi-disciplinary.”

So let’s get to the crux of Sawyer’s argument about the emergence of intelligence and consciousness. He writes in this essay,

That, of course, raises the question of whether intelligence could just somehow pop into existence — whether it’s an emergent property that might naturally come about from a sufficiently complex system. Arthur C. Clarke — Hal’s daddy — was one of the first to propose that it might indeed, in his 1963 story “Dial F for Frankenstein,” in which he predicted that the worldwide telecommunications network will eventually become more complex, and have more interconnections than the human brain has, causing consciousness to emerge in the network itself.

If Clarke is right, our first true AI won’t be something deliberately created in a lab, under our careful control, and with Asimov’s laws built right in. Rather, it will appear unbidden out of the complexity of systems created for other purposes.

And I think Clarke is right. Intelligence is an emergent property of complex systems. We know that because that’s exactly how it happened in us.

This is an issue I explore at some length in my latest novel, Hominids (2002). Anatomically modern humans — Homo sapiens sapiens — emerged 100,000 years ago. Judging by their skulls, these guys had brains identical in size and shape to our own. And yet, for 60,000 years, those brains went along doing only the things nature needed them to do: enabling these early humans to survive.

And then, suddenly, 40,000 years ago, it happened: intelligence — and consciousness itself — emerged. Anthropologists call it “the Great Leap Forward.”

Modern-looking human beings had been around for six hundred centuries by that point, but they had created no art, they didn’t adorn their bodies with jewelry, and they didn’t bury their dead with grave goods. But starting simultaneously 40,000 years ago, suddenly humans were painting beautiful pictures on cave walls, humans were wearing necklaces and bracelets, and humans were interring their loved ones with food and tools and other valuable objects that could only have been of use in a presumed afterlife.

Art, fashion, and religion all appeared simultaneously; truly, a great leap forward. Intelligence, consciousness, sentience: it came into being, of its own accord, running on hardware that had evolved for other purposes. If it happened once, it might well happen again.

And that’s what his book WWW: Wake explores in the first part of a planned trilogy. Plus you get Chinese censorship, Japanese technology, Canadian mores and much more as part of the package.

So what’s the problem? I’ll speak first to Jaynes’ Origin of Consciousness. Provocative thirty years ago but not good science today – it’s a progressive view that projects the Chain of Being onto history itself, with a mash-up of older ideas from neuroscience (separated hemispheres, ideas about schizophrenia) and archaeology/history (voices from the Gods, ancient literary styles) that is more about the mashing than in-depth scholarship.

For more on these ideas, you can read Jaynes’ later essay, Consciousness and the Voices of the Mind (pdf). Some interesting ideas there, as many have recognized, for example, that we shouldn’t think of consciousness as located exclusively in our heads. As he writes, “We use our brains in riding bicycles, and yet no one considers that the location of bicycle riding is inside our heads.”

Sawyer uses Jaynes’ views of how conscious awareness develops to good effect in the novel, but it remains a view predicated on an essentialist individuality – a separation of self from other, and the importance of perception and knowing. Consciousness explains itself, as it were, which doesn’t quite capture the interactive approach of today’s neuroscience and anthropology.

Returning to Sawyer’s own presentation of his ideas above, I’d just add these critiques from the point of view of four-field anthropology. He’s not really an evolutionary biology, for example, with (a) research on animal intelligence, with self-awareness now demonstrated in a range of species through mirror tests and tool making and tool use showing up in a growing number of species, and (2) a phylogenetic, incremental view to any sort of mechanism, where there are precursors out of which other adaptations emerge – not one sudden leap from nothing, but emergence that does depend on initial conditions and historical pathways as well as functional effect (not simply “awareness”).

Nor is Sawyer really a paleoanthropologist. For example, the use of beads (demonstrating symbolic behavior) dates back over 100,000 years now, directly questioning the 40,000 Big Bang of consciousness. And Neanderthals appear to have also engaged symbolic activity with an implicit recognition of consciousness, demonstrated through the burial of dead.

And finally Sawyer is not really a cultural anthropologist, where consciousness depends on symbolic interactions rooted in culture and not simply consciousness and where sociality is a key component to our being human. In this case, his theory is belied by the actual story in the novel, where the Waking of the world wide web happens through interactions with Caitlin and with a central role played by culture, in this case, the technical resources humans have put online to buttress cognition and knowledge, including anticipating that artificial intelligence will develop and will need a set of resources for us to understand it and for it to work better.

But that’s just the anthropologist in me. The sci fi reader enjoyed the book, and Sawyer did his creative and intellectual license proud in telling an engaging story that also brings to light a heady mix of ideas.