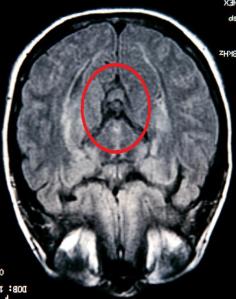 Thank God for Vaughn at Mind Hacks. Or should I say, Graça à Nossa Senhora (that’s Thanks to Our Lady for those of you scratching your heads)… He brings to our attention this brain image which shows Our Lady of the Cerebellum in his posting Immaculate perception.

According to the original story, we learn that in 2002, Pamela Latrimore underwent an MRI that, in the eyes of some, imaged the Virgin Mary where most of us have a cerebellum (although, that would explain if she was having some motor control problems…). The original story, Do you see the Virgin Mary in this brain scan?, appeared in the TCPalm, Florida’s Treasure Coast and Palm Beaches’ news leader.

As the story reports:

Latrimore, a 42-year-old wife and mother without insurance, hadn’t ever really looked at the results of a 2002 MRI scan of her brain. So she didn’t know what her Catholic sister-in-law was talking about a few weeks ago when she said, “Oh my gosh, Pam, you have Mother Mary in your head.”

This story would be unmitigated fun, a chance to spin out all sorts of jokes about which parts of the brain ‘light up’ when we see a pattern of the Holy Mary in our brain images, except for the fact that, if you read a bit further in the TCPalm, you learn why Ms. Latrimore was getting brain scans in the first place, and perhaps why she and her relatives are searching for signs of any divine intervention.

She [Latrimore] prays for strength for her 23-year-old daughter and health for her family, many of whom — like her — are sick with a variety of serious ailments that seem to stem from a childhood in Jacksonville, Ark., a place where Agent Orange was manufactured and which has been investigated by the U.S. Department of Health and Human Services. Some Jacksonville residents were exposed to dioxin, a toxin that can cause a variety of illnesses, including cancer, asthma and liver problems.

Latrimore has had cervical cancer. She suffers from fibroidmyalgia, asthma, seizures, liver problems, ulcers and a variety of other ailments. She feels she is dying.

Latrimore does not have insurance, she was denied disability, and her husband is out of work. The medical bills have piled up — according to the story, she doesn’t know the total but suspects that they are now more than $100,000 that she does not have. And she’s apparently been diagnosed with an additional lung problem.

So this is a health care system without a safety net: take your brain scan, which was probably done looking for the cause of your seizures, and, if you’re lucky, it won’t just be used to diagnose your problem, but might get you a bit of money on eBay to pay for your mounting bills. After all, a toasted cheese sandwich with the Virgin Mary took in $28,000 a few years ago.

The listing on eBay for the Mary MRI can be found here. Reading the listing is heart-breaking, not only because of the woman’s own suffering, but also because of her account of how the manufacture of dioxin and Agent Orange has affected health in her community. She writes that she is putting the image up for auction, not only to raise money for her healthcare, but also to attract greater attention to the problem of environmental poisoning in her area of Florida.

A bit of background research quickly pulled up a story in The Nation, ‘Agent Orange’s Forgotten Victims’ from 1988, and other information on the manufacture, storage and dumping of toxic chemicals in Jacksonville, Arkansas, an area that eventually was declared Vertac/Hercules Environmental Protection Agency (EPA) Superfund site. As Peter Montague writes online at Rachel’s Hazardous Waste News #311: ‘The Vertac site was used for manufacture of DDT, aldrin, dieldrin, toxaphene and the chemical warfare defoliants 2,4-D, Silvex, 2,4,5-T, and Agent Orange.’

In 1986, Vertac declared bankruptcy and left the site to the people of Arkansas to sort out. As The New York Times wrote (here for a more recent story on Jacksonville’s Vertac-generated woes):

Vertac abandoned the plant leaving behind roughly 30,000 barrels of chemical wastes, along with acres of contaminated soil, tanks filled with toxic materials, and miles of poisonous piping. The EPA [U.S. Environmental Protection Agency] considers the site one of the country’s worst hazardous waste sites, not only because of [the] extent of the contamination but also because the plant is only a few blocks from a day care center, a hospital, and hundreds of houses. (this passage quoted in Montague)

I won’t go into all the grim details, the political wrangling and community outrage around an incineration project, except to say that, well, they details are damn grim even though some researchers dispute the data on the human toxicity of dioxin (I wonder who funds those scientists?). The National Toxicology Program’s most recent discussion of 2,3,7,8-Tetrachlorodibenzo-p-Dioxin (TCDD) is pretty damning (For a pdf of the section on dioxin in the 2005 Report on Carcinogens, Eleventh edition, click here). For more specific information on the Vertac Superfund site, you can check out Scorecard’s site on it.

In other words, I hope that some good bids come into eBay for the image of Our Lady of the Cerebellum. If you’re in the market, I’ll do what I can at Neuroanthropology to make sure it’s the most famous MRI ever taken…

h/t: Graça ao Vaughn for bringing us the lead on this one.

48 thoughts on “Our Blessed Lady of the Cerebellum”