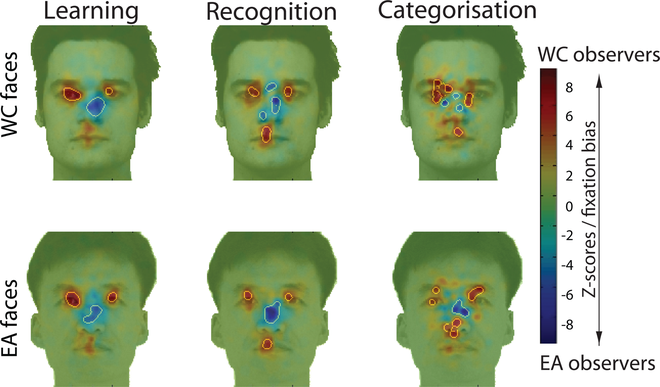 Brandon Keim, Culture Shapes How People See Faces
New research on East Asian/Western contrast in facial perception using eye tracking. Has this great graphic! And includes this important quote: “We tested some Chinese who had been in Glasgow for three or four years, and you see a clear difference between them and those who just arrived,” he said. “That really demonstrates that it’s not genetic. It’s experience.”
For more detail on the study, see Ed Yong’s piece “Westerners Focus on the Eyes, East Asians on the Nose”

LL Wynn & Nikki Kuper, Annotated Bibliography on HTS, Minerva and PRISP
A comprehensive listing of resources on the US Army’s Human Terrain Systems and other efforts to engage social science (and in many minds, subvert and corrupt it). Erkan Saka offers some more links, as well as other interesting anthro stuff, in one of his round-ups.

Somatosphere, Web Gleanings 2
Another round up from the new med anthro blog – quite a collection!

Antropologi, Open Access: New Alliances Threaten the American Anthropological Association
Did the AAA make the wrong choice in hiding its online publications away?

Madeleine Coorey, Prehistoric Giant Animals Killed by Man, Not Climate: Study
In Tasmania, the climate was stable so recently arrived humans become the main suspects in the disappearance of giant kangaroos

Roger Cohen, News Good Enough to Be Buried
Nice op-ed: “In my lifetime, conditions have grown immeasurably better, freer and more prosperous for a majority of humanity, yet hand-wringing about the miserable remains the reflex mode for most coverage of planet earth.”

Randolph Schmid, Monkeys Reward Friends and Relatives
Better to give and receive rather than just give—the importance of building relationships and reciprocity

Arthur Shapiro, 100th Anniversary of “A New Visual Illusion of Direction”
Another great one from Illusion Sciences—clicking on the red lines really made the difference! And we get plenty of added intellectual background too!

Brandon Keim, Books as Disgusting as Movies, Say Scientists
Wired on how reading books light up brain areas just as well as video—hmm, maybe it’s not just environment and computation…

Christian Hoppe & Jelena Stojanovich, High-Aptitude Minds: The Neurological Roots of Genius
Size matters. But so does activity. But what does all that mean?

Gregory Kellet, The Biology of Learning
Neurons as the sticky units of learning—and a great metaphor of going from deer paths to interstates in building paths and connections

Neurophilosophy, Growth Factor Receptor Governs Neurogenesis and Sensitivity to Antidepressants
BDNF comes into play – important research on basic neurobiology and the mechanisms that mediate antidepressants (and presumably other drugs through similar mechanisms)

Paul Grobstein, Interdisciplinarity, Transdisciplinarity, and Beyond: The Brain, Story Sharing, and Social Organization
Online article by the Bryn Mawr professor who also runs the site Serendip, which has even more interactive brain stuff

John Tierney, Technology That Outthinks Us: A Partner or a Master?
Vernor Vigne’s future vision at the NY Times. You should also check Vigne’s compelling essay Signs of the Singularity on the convergence of various technologies with our future life.

Genetic Future, The Gene for Jamaican Sprinting Success? No, Not Really.
Cultural success leads to the usual claims of biological determinism. Here’s a good refutation of genetic claims for athletic superiority in Jamaican sprinters like Usain Bolt

Mark Czarnecki, The Other Darwin: The Nineteenth Century Naturalist Gets Emotional
Walrus article on Darwin’s work on emotions, and the history of this sort of work since then

Greg Bluestein, Research Aims to Put Tongues in Control of Devices
Tongues as the next brain/technology interface!

Adina Roskies and Walter Sinnott-Armstrong, Between a Rock and a Hard Place: Thinking about Morality
The dual process model of morality—raw emotion and controlled cognition. But don’t emotion and cognition go together?

Allison Aubrey, To Lower Blood Pressure, Open Up and Say “Om”
Meditating can reduce blood pressure – a new scientific study, with good considerations of the mechanisms involved in this radio piece at NPR

NPR, All That Glitters Is Not… Silver
Great radio show on the meaning of coming in second, with a focus on human contrafactual thinking: “what could have been…”

Tara Parker-Pope, For Health, Body Size Can Be Misleading
Variation in the health consequences of weight—not everyone overweight is “unhealthy,” and some skinny people aren’t doing so well either

Tara Parker-Pope, Better to Be Fat and Fit than Skinny and Unfit
“Is a person’s weight really a reliable indicator of overall health?”

The Situationist, The Situation of Eating – Part II
Some good links and considerations, plus a video with the author of Mindless Eating

One thought on “Wednesday Round Up #26”