By Casey Bouskill and Daniel Lende

In June, Jan Hoffman of the New York Times wrote “When Thumbs Up Is No Comfort,” reflecting on Ted Kennedy’s diagnosis with cancer and the ways in which the public obliges cancer patients to remain hopeful and strong while they ‘battle’ the ubiquitous and relentless disease.

Senator Kennedy presented an unfailingly upbeat attitude throughout his bout with a brain tumor, aided by such media images of him flashing a ‘thumbs-up’ to a crowd after a recent sailing race.

“Whether you’re a celebrity or an ordinary person, it’s obligatory, no matter how badly you’re feeling about it, to display optimism publicly,” said Dr. Barron H. Lerner, the author of “When Illness Goes Public.”

That optimism reassures anxious relatives, the public and doctors, regardless of whether it accurately reflects the patient’s emotional state. “If Ted Kennedy wanted to stick up his middle finger,” Dr. Lerner added, “that would be the more appropriate finger, but he’s doing what he is supposed to.”

Our ethnographic research with breast cancer patients here in South Bend, Indiana suggests that women are also fighting back against this so-called tyranny of optimism. Not by flashing the middle finger but by laughing! 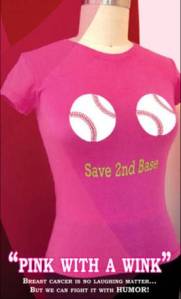 Ostensibly, this humor seems to reflect that patients are cheerful and hopeful, just as the public obliges for women ‘battling’ breast cancer. But after thirty interviews and multiple participant observation sessions, we discovered that the use of humor among breast cancer patients extends far deeper. Essentially it is a covert rejection of these cheerful expectations ascribed to breast cancer patients.

In fact, these ‘bad gals’ of breast cancer described how personalized and often crude humor, relating to everything from hair loss to hot flashes to breast reconstruction, is a proud way of asserting one’s individuality and personality. It also forces others to acknowledge that cancer is a painful reality, and one that deserves recognition.

Breast cancer patients arguably have to deal with the expectation of cheeriness more than any other group. For the last fifteen years, it has been virtually impossible not to drive a car, enter a supermarket, or live through the month of October without feeling entangled in a web of pink ribbons. The arsenal of the pink ribbon acts as the unanimous symbol of support, as unwavering as the marches and speeches that go along with it. And this pink ribbon campaign consistently portrays the image of a middle-aged, white, beautiful woman whose life has been tragically put on hiatus while she valiantly fights the disease.

Somewhere between the ribbons on yogurt lids and rear bumpers of cars, society has lost touch with the reality of breast cancer and who suffers from it. In the United States breast cancer is affecting women (and men!) of all races, ages, socioeconomic statuses, and sexual orientations, leaving the many who do not fit the pink ribbon mold to have to reassert their personal identities and disavow themselves from society’s false pretenses.

How does humor act to reverse this growing trend?

Take an example from Jeannie. “Wait ‘til you see my double D’s!” she proudly proclaimed after receiving a partial mastectomy.

Or Marjorie, dealing with work because there was no easy hiatus from getting on with her life. A colleague, seeing her hair loss after chemotherapy, commented, “Marjorie, I see you got a new hair-do.” She gave a laughing in-your-face reply, “Yeah, well that’s what happens when you get CANCER! Ha!” The startled man began to apologize profusely while she just laughed at the situation.

For Marjorie, this teasing reply showed she was “just being herself.” Just being herself meant being an African-American woman, getting over cancer, working hard at her job, and going about her daily life with a bald head. Humor allowed Marjorie to exude her true personality, to show others that she was enduring a struggle and trump the overly demure and impersonal image of that pink-ribbon patient. She made no apologies if that startled people or appeared out-of-context.

But wait- Breast cancer is… funny?

Well, no. In fact, there is nothing humorous about chemotherapy, mastectomies, hysterectomies, and the looming fear of death. But when a breast cancer patient initiates humor, especially with those outside of ‘cancer-world,’ she is forcing the receiver of the humor to recognize that there is more to her than just the disease, the doctors, and thumbs-up enthusiasm.

Much of the humor used by patients and survivors revolves around such dreaded side effects such as hair loss, breast deformation, and hot flashes (for the actual humorous accounts, pick up a copy of Underneath it All: Humor and Breast Cancer at Memorial Hospital South Bend). Humor acts as a blunt affirmation that a woman has accepted cancer, recognizes the struggle, and wants others to know that while it is difficult, she will prevail — on her own terms. So, what may seem like inappropriate or out-of-place laughter is really a lighter way of proclaiming that a woman is still a woman.

In addition to being overly-patronizing, the forceful expectation of being constantly positive heightens the anxiety of cancer by demonstrating that patients are essentially not entitled to their human feelings of pain and worry. One patient described this frustration with the public’s assertion of optimism because it completely blots out the entire struggle and makes it seem as if the pain of cancer is not happening. “Cancer sucks!” she said bluntly. “There’s nothing that can change that.”

Frustrated with the rosy-colored glasses- er, ribbons- that kept people from acknowledging what was truly happening in her life, humor helped this woman to both express her great efforts and trump the falsely-idyllic image of breast cancer patients.

No one ‘scripts’ cancer into their life, so when it hits, a patient strives to have as much power over the seemingly uncontrollable disease. Yet very real constraints set on by biomedical regiments of chemotherapy, surgeries, and radiation make the reality of taking control a Sisyphean task. The issue is exacerbated when patients lack the ability to express their emotions, concerns, fears, and triumphs by an overbearing social expectation.

Certainly hopefulness is a very real and necessary aspect of dealing with the hardship of cancer, but patients feel a significant drain when they feel like being positive is a duty. Moreover, such an obligation keeps cancer patients from feeling worried, angry, depressed – all of which are normal human emotions.

Humor lets women acknowledge these feelings and also exert their own sense of control—to laugh at that which threatens. Not always at first, when the diagnosis and chemotherapy strike hard, but over time yes. Laughing showed they were human, a person who was alive, not caught between a deadly disease and forced societal optimism.

When we take a ‘stand’ against breast cancer, are we really telling breast cancer patients that we care about their struggle, about who they are and what they feel? Perhaps next time, along side that pink ribbon, we ought to share a laugh with a patient. For that woman, having her true voice heard could be the best support available.

Image from: http://www.save2ndbase.com
Thanks to: Margaret McKinney-Arnold and African American Women in Touch for their support, and the other students–especially Stephanie Pelligra, Caroline Nally, and Katie Carroll–who helped with this research.

7 thoughts on “When Pink Ribbons Are No Comfort: On Humor and Breast Cancer”