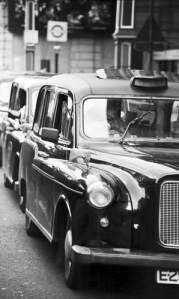 The BBC has a nice piece covering the continuing research of Prof. Eleanor Maguire (Wellcome Institute of Neurology, University College London) on the distinctive development of the hippocampus in the brains of London taxi drivers: Taxi drivers’ brains ‘grow’ on the job. Prof. Maguire’s research in this area is pretty extensive (see publication list). She’s found a great naturally occurring experiment in the brains of cabbies who have to navigate London’s notoriously byzantine downtown streets.

As the BBC report describes, driving a cab in London is difficult and demands a well-developed knowledge of urban geography:

In order to drive a traditional black cab in London drivers have to gain “the knowledge” – an intimate acquaintance with the myriad of streets in a six-mile radius of Charing Cross.

It can take around three years of hard training, and three-quarters of those who embark on the course drop out, according to Malcolm Linskey, manager of London taxi school Knowledge Point. “There are 400 prescribed runs which you can be examined on but in reality, you can be asked to join any two points,” he told BBC News Online.

As the BBC story explains, this on-the-job geographic education has distinctive, observable effects on the way that the cabbies’ brains seem to handle geographic information. In particular, the extensive training seems to affect the actual size and shape of the hippocampus.

The tests found the only area of the taxi drivers’ brains that was different from the 50 other “control” subjects was the left and right hippocampus.

Prof. Maguire’s earlier research has covered a range of related topics, including studies of the navigational abilities of cabbies with hippocampal lesions (turns out that they lose track of side streets but not primary arteries); whether bus drivers’ brains develop in similar ways (short answer: no); and whether the hippocampus is helping navigation by remembering geography or plotting spatial relations (short answer: seems like it’s mapping). (Note: the lead author on the last article is Dr. Dharshan Kumaran, who according to the University College London website is a former clinical research fellow continuing his clinical training at King’s College Hospital, London.)

This research on London cabbies has a number of interesting implications for neuroanthropology:
1) Other groups of people with extensive working geographical knowledge likely have similar brain development (although London cabbies may have a particular well-developed geographical sense — I don’t know). That is, foraging peoples, migrating herders, Aboriginal groups who have elaborate geographical systems of social memory and mythology might have brains that allocate additional resources to spatial memory. The shift in the hippocampus may be a pervasive developmental trait in cultures, professions, or other roles that demand this kind of knowledge.

However, one thing that I really like about Prof. Maguire’s research is that she has also looked at how the cabbies remember “the knowledge” of London geography. That is, her papers suggest that the cabbies are actually remembering geographic places rather than plotting spatial relations among them when they navigate. We might find that other groups with extensive geographical memory solve this problem in a different fashion. The evidence from ethnographic work (such as in the collection, Senses of Place, by Steven Feld and Keith Basso) is that there are significant differences in modes of remembering of places. For example, in Feld’s extensive research on the Kaluli, song seems to be crucial to remembering paths, traveled or imagined, between landmarks in the Papuan rainforest; in Basso’s work on Western Apache storytelling, places seem more tightly tied to particular stories. These performative differences in remembering might be linked to distinct neurological strategies for recalling geography.

2) Spatial knowledge is frequently treated as a form of ‘intelligence,’ with some theorists arguing it is largely fixed. The data from Prof. Maguire’s research would certainly cast substantial doubts on this conclusion, perhaps even on some sex differences in brain structure. Again, it’s not clear; men’s and women’s brains might respond differently to the same long-term stimuli when it comes to processing spatial or geographic information (again, they might even store the information differently), or some differences may be the result of long-term patterns of training and use.

I’d be deeply suspicious of naturalizing any gender differences in geography without substantial comparative data. I know that my wife, for example, has uncanny spatial and geographic sense, in part because her knowledge of the New South Wales countryside is so damn extensive, and also because of her background in outdoor education, where orienteering and long-distance hiking are essential. How she recalls space and directions might be very different than they way that I do.

In Salvador, I was always struck by the way that vertical displacement affected people’s sense of distance and proximity. Because the city is shot through with very steep hills, many of which are very hard to traverse (or even dangerous), low-lying areas and ridge-top regions are ‘separated’ in many people’s sense of geography. Only by learning to navigate the bus routes in low-lying areas was I able to begin traveling about the city quickly, but I sense that in doing so, I had to learn to navigate social spaces that many upper-class Baianos (the residents) didn’t really frequent at all. In other words, geography was organized by routes of travel, and it was definitely a learnable, flexible skill, differentiated more by experience and social boundaries than by innate ability.