By: Carolyn, Andrew, Brandon, and Sarah

Drunk- this five letter word has many connotations, ranging in extremes from positive memories to negative stigmas. For men and women, it is one word that has different meanings, from the number of drinks it takes to get drunk to the behaviors men and women are expected to exhibit while drinking. For college women and men in particular, binge drinking is an area in which they relate quite distinctly with alcohol. Gender norms, rituals and relations often lead to, and perpetuate, binge drinking on campuses nationwide.

Many aspects of college drinking are unique. Tailgating is one of them. Where else can you find people drinking excessive amounts of alcohol early in the morning? At big football schools, tailgating facilitates the social learning of binge drinking as a normal and acceptable behavior. The ritualized drinking associated with tailgating is often the first place where students are introduced to binge drinking. It also sets a precedent of drinking enough alcohol to get drunk and stay drunk for an extended period of time.

In the fall, people tailgate every weekend before football games. In the ritual of tailgating, binge drinking as a socially learned experience is evidenced by the fact that students learn to drink from the very alumni whom they are taught to respect and admire. Across the nation, students only need to leave their dorms to encounter the alumni who have been drinking since early morning. Since this is often a student’s first exposure to binge drinking, students may initially be shocked to find huge crowds of people drinking heavily in parking lots and around campus. The immersion in the football culture, which often depends upon tailgates, will soon numb any hesitation or doubts the student may have.

Tailgating perpetuates binge drinking among the general student population, but its significance varies based on gender. During a typical night out, a college student may consume four or five drinks to “pregame” before the actual party has even started. Many students do not realize that this qualifies as binge drinking, and that it impacts women and men differently.

As discussed in A Gender-Specific Measure of Binge Drinking among College Students, both men and women perceive that men consume more alcohol more frequently than women do. Just as women are perceived to drink less than men, the actual number of drinks it takes to affect women in comparable terms to men is smaller. Women who drink four drinks when they go out experience effects similar to men who drink five. Interestingly, one beer does not increase a woman’s Blood Alcohol Content (BAC) as much as one shot of whiskey or one glass of wine, while all three drinks have the same effect on the male BAC. This presents a drinking problem, since college women generally prefer wine and hard alcohol are over beer.

But the differences in drinking patterns cannot be attributed to purely biological or physiological factors. As mentioned before, the idea of “pregaming” before an event, such as a football game, is carried out in different ways by both genders. Before parties or social events, guys generally drink beers in their dorms, watch movies, or play video games to relax. Getting ready for girls is much more of a process which involves taking shots, putting on makeup, and getting dressed to go out. The different practices exhibited by the sexes in relation to alcohol can also be seen at off-campus parties and bars, where a majority of men drink beer while women have mixed drinks containing hard alcohol.

At the bars and parties where men and women interact, alcohol lowers inhibitions, induces relaxation, and calm nerves. This creates a unique “environment” that puts everyone at ease, relieving the tension between genders. Because of the alcohol-induced boost in confidence, males and females alike are more likely to initiate conversation. Alcohol also lowers the fear of rejection—people will take risks since they still have the opportunity to have a good time with their friends even if they are rejected. For this very reason, alcohol can become a crutch for social interactions in college, making it difficult for interaction and communication between genders without the presence of alcohol. 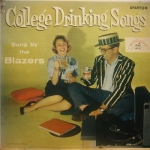 Because alcohol is an important factor in college social life, a direct correlation exists between alcohol and the social identity of students. As demonstrated by the Gender Specific Misperceptions of College Student Drinking Norms, alcohol appears to be more relevant to the male social identity than to the female social identity. Both genders agreed that a man’s image or reputation relies more on alcohol consumption than a woman’s does. This drinking norm causes women to think of alcohol consumption in terms of how they compare to men, while men compare only to each other.

The role of alcohol in influencing male reputations is demonstrated by their perceptions of binge drinking in comparison to female perceptions. In a survey we carried out, a female respondent said “Binge drinking is when you drink the night before and then feel hung-over the next morning with a headache.” A male respondent had a very different view of binge drinking, stating that it requires enough alcohol consumption to “blackout at the end of the night, and wake up in the morning lying next to some girl we don’t even know and not remember anything that happened the night before.”

The extreme differences reflect the different societal pressures and expectations for the genders. For the female, bingeing involved a “headache,” while the male associated bingeing with extreme alcohol consumption leading to a “blackout” and sex. Perhaps this is because a male is more likely to be judged by how much alcohol he drinks; drinking more is associated with being more “manly,” and thus, more attractive to women.

The gender differences in drinking mentality demonstrate that mental and emotional aspects play a large role in gendered binge drinking. Guys will drink hard before and at sporting events so they can get excited, cheer for their teams, and “just relax on the weekends and get wasted.” While males seem to associate binge drinking and sporting events, almost all the females revealed that they over-consume alcohol when they are “upset” or very emotional. Although emotional could mean happy or sad, the females said that negative emotions usually intensify their binge drinking. For example, after being rejected a girl may seek validation by hooking up with another guy. However, when this decision is made under the influence of alcohol, it can be viewed as a regretted sexual behavior the next day.

Issues of miscommunication and misunderstanding between the genders can be intensified by the presence of alcohol. When it comes to dating and sexual behavior, American gender norms expect men to be dominant and forceful, assuming “no” means “convince me” when it comes to sex — especially when alcohol is involved. In contrast, women are often more cautious because they want to avoid being labeled as fast or promiscuous. Drinking can often act as an escape for women, giving them a valid “excuse” for their behavior.

These differences in social perceptions and norms for men and women are evidenced in the way in which the two sexes approach drinking. As the blog Gender and Alcohol explains:

In the world of booze, women are sexual prizes that can be won by drinking the right beverage – or they are the “ball and chain” that men and their buddies escape from through alcohol. Happy couples do exist, but only in a fantasy world of yachts, beaches and exotic locations. Casual sex in a party setting is presented as the norm, with taglines such as “names optional” and “nice finish.”

The unique American cultural perspectives that might motivate or influence peoples’ choices to drink “in the world of booze” often relate to sex and gender. Alcohol is portrayed as a free ticket of sorts which can allow people to accomplish what they could not do sober- whether this means relating to the opposite sex or aiding them in sexual conquest. Alcohol has come to be viewed as a sort of “liquid courage,” allowing people to justify their drunken actions as an attempt to assert themselves or increase their confidence.

While most people do not realize it, the cultural values and social norms about gender differences are perpetuated through drinking rituals and social interactions. Drinking is one of the most important ways in which gender is constructed and experienced on US college campuses.

Without including gender, efforts to tackle binge drinking will not address the social reasons men and women have to drink. Interventions that treat men and women alike miss the fact that when drinking, college men and women are revealing and emphasizing their differences. In contrast to the classroom, where they are simply students, at parties and bars men can be men and women can be women. Although drinking is not necessarily a battle of the sexes, the role of social norms and expectations about gender cannot be ignored when it comes to alcohol.

2 thoughts on “College Drinking: Battle of the Sexes?”