Do you remember the anti-drug public service announcement from the 1980s that showed an egg frying in a hot pan which represented your brain on drugs?

During the 1990s, brain imaging moved beyond fried eggs as computer technology allowed researchers to process large amounts of data required for functional imaging approaches. As a result, the PSA mentioned above no longer provides the most accurate analogy illustrating what happens to the brain when exposed to drugs.

Today, brain imaging research has helped create a sophisticated “disease model” of chemical dependence related to changes in the function of neurotransmitters and receptors in the brain. These circuits are responsible for reward processing, memory and learning, motivation and drive, in addition to control (Nora Volkow describes these circuits in a 2004 literature review).

This particular post focuses on the techniques used most commonly to study the brain’s role in addiction and other mental health problems. We will cover the principle behind each method, advantages and limitations of each, and provide an example of the results that can be obtained.

Beyond the Frying Pan: EEG and CT

Electroencephalography (EEG) and Computed tomography (CT) were two of the first methods used to study the brain. EEG utilizes electrodes placed on the scalp that measure electrical impulses, whereas CT creates a three-dimensional image of the brain with two-dimensional x-rays.

EEG is a non-invasive procedure with high temporal resolution; it is often used to record the brain’s response to a stimulus (e.g. an individual ingests a drug and the change in brain activity is recorded).

EEG is limited because it can only record data from the surface of the brain. In addition, EEG does not produce images of the brain—it only measures electrical impulses.

CT is used to create three-dimensional images. Unfortunately, CT cannot produce high-resolution images of soft tissue (i.e. the brain) and requires high levels of radiation. While CT is still used, predominately to create images of the body, it has to be used infrequently to avoid excessive radiation exposure. Although EEG and CT did not teach us much about addiction, these methods were the technological precursors to more egg-cellent brain imaging methods.

Unscrambling the Mysteries of the Brain with MRI and fMRI

Ever wonder what it’s like to have radio waves sent through your brain? Well, Magnetic Resonance Imaging (MRI) may be for you! MRI produces high quality images of the brain by using a large, cylindrical magnet to create a magnetic field around the head. Radio waves are sent through this field and alter hydrogen nuclei in the brain. These detectable changes are subsequently transmitted to a computer and used to generate a series of images. 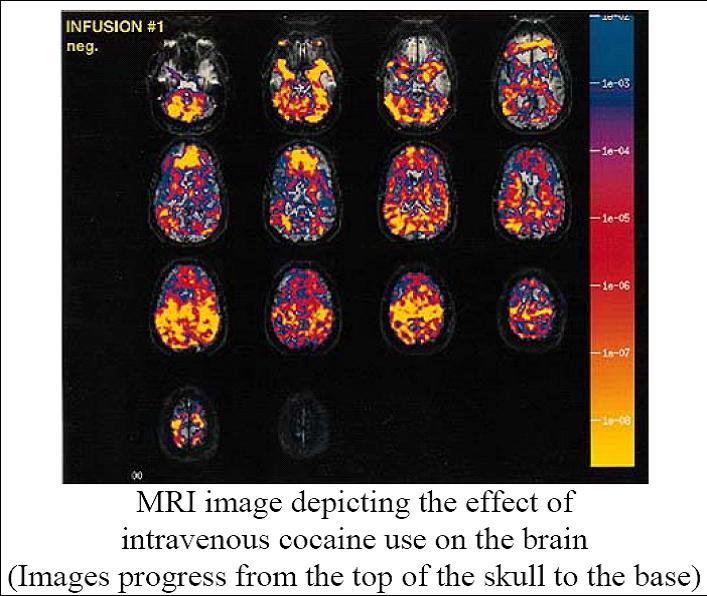 Using these images, scientists are able to determine minute changes in the brain that occur over time by comparing different MRI scans.

This leads to the recent development of Functional Magnetic Resonance Imaging (fMRI). This technique, developed only recently, has allowed scientist to use MRI technology to capture images of various brain functions. 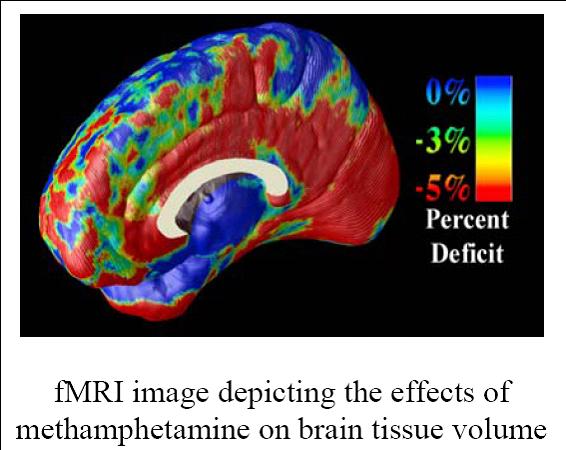 This method is advantageous because it allows researchers to capture a series of images every second. These images can be used to create “movies” monitoring changes in brain activity.

By producing sequential images, fMRI records the areas of the brain that are activated. In addition to detecting substance use, fMRI is also a good lie-detecting device, as it senses activity in certain regions of the brain associated with specific behaviors.

Like all good things, including eggs, which contain a great deal of cholesterol, there is a downside to fMRI: blood flow is only an indirect measure of neuronal activity and fMRI only shows where activity takes place—not exactly what is going on.

This method utilizes small amounts of radiotracers (i.e. molecules with a short-lived radioactive constituent atom such as carbon-11 or oxygen-15), which are localized by sensors that create computer-compiled images. These images depict the relative amount of radiotracer present by using a color gradient—red being the highest concentration and blue the lowest.

Like fMRI, PET can be used to study regional cerebral blood flow (rCBF) via radio-labeled water in the bloodstream. Additionally, PET can look at glucose metabolism that shows regional neuronal activation.

Unfortunately, PET cannot achieve the temporal or spatial resolution possible with fMRI, and uses trace amounts of radiation: only one PET scan is allowed per year due to concerns regarding radiation exposure.

PET is most useful when studying neurotransmitter function and holds an advantage in temporal and spatial resolution over SPECT (discussed below).

The only downside is that it takes time to develop appropriate radiotracers. Currently, the dopamine, GABA, and cannabinoid circuits can be examined, but suitable radiotracers for other neurotransmitters are still lacking. It is likely that future research will solve this problem.

Egg SPECT to Be Amazed

The name Single Photon Emission Computerized Tomography (SPECT) sounds impressive because it is. This method utilizes tracers that are directly injected into the body’s blood flow to highlight the level of neuronal activity in the brain.

After tracers are injected, a “gamma” camera rotates around the head to record data, and a computer uses the data to construct 2D or 3D images of active brain regions—inactive areas of the brain show up as dark voids.

SPECT confirms areas of the brain that correspond with a person’s neural activity, and can be used to identify symptoms associated with drug use or mental illness. It can track the effects of counseling and medications: as an individual gets better, brain areas will change in activity level.

Although SPECT can’t create images as detailed as a PET scan, images can be viewed in both 2D and 3D. This method is not very expensive, and the procedure doesn’t need as many technical and medical staff to complete. The following SPECT images illustrate the effect of drug use on brain function.

SPECT not only shows damage, but also shows improvement when substance use is discontinued.

To see more examples of how the brain is affected by drug and alcohol use using SPECT, click here: http://www.amenclinics.com/bp/atlas/ch15.php

We have come a long way since the frying pan days. Clearly, the results of brain imaging studies are very useful in that they help researchers better understand what happens to a brain that has been fried by drugs.

Additionally, potential drug therapy treatments have been suggested based on the “circuits” model. The general aim of this approach includes decreasing a drug’s reward value, dissociating drug use from pleasurable memories, and restoring normal brain activity.

While brain imaging is a very useful tool, it does not provide a complete understanding of addiction. Each technique has limitations, as described above, but future developments are sure to strengthen these technologies. In addition, treating addiction purely as a brain disease has its own limitations, in that it ignores the powerful socio-cultural factors that contribute to drug use.

And just like anything else within the scientific realm, it is crucial that all hypotheses be rigorously tested: quality of research methods, and restraint when interpreting results, must not be sacrificed in order to draw exciting conclusions.

Finally, it is important to note that brain imaging is only able to show correlations in data, not causations: as a wise professor once said, “lines drawn on a map cannot show you why countries wage war.” However, in the future, increased scientific understanding of brain addiction, as well as the results of future imaging studies, may be able to show how borders change as a result of war.