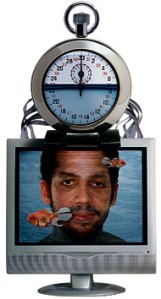 I’ve been waiting to hear how David Blaine went in his attempt to break the world record. John Tierney reports in David Blaine Sets Breath-Holding Record on The New York Times website that, in fact, Blaine was successful. On Oprah Winfrey’s show, he held his breath for 17 minutes 4 seconds, a world record for the activity with the use of pure oxygen before making an attempt.

As Tierney reports, Blaine was successful in spite of the fact that he couldn’t control his heart beat like he had on previous breath holding:

After he filled his lungs with pure oxygen, his heart rate remained at 130 during the second minute of the breath-hold and then stayed above 100 for much of the time. It was 124 in the 15th minute. The higher the heart rate, the more quickly oxygen is consumed, and the more painful the carbon dioxide buildup. But apparently his CO2 tolerance training (repeated breath holds every morning) was just enough to compensate. In the last minute his heart rate became erratic and he got concerned enough to start rising from the bottom of the water-filled sphere, but he kept his head underwater more than a half minute longer than the old record of 16:32.

Tierney reports that during training, Blaine was able to keep his heart rate down into the range of 40 to 60 beats-per-minute, but being on television apparently made it difficult to keep his pulse down.

I’m interested in Blaine and his breath holding exercises because they are an interesting example of the way that conscious, executive brain functions can be extended to control, or at least substantially influence unconscious autonomic systems. That is, the boundary between the unconscious and the conscious, the automatic and the intentional, is movable, something that I’ve observed a lot in my research on skill acquisition and bodily training. In sports training, for example, it’s often the case that coaches have to dredge up into their own conscious awareness a sense of what they are doing during actions that are almost automatic. In the other direction, training for highly skilled action is often a slow process of working very intentional patterns of action, activities that demand a lot of attention, into unconscious processes. Trying to fix technique is often a matter of dragging a bodily skill back and forth into greater or less consciousness.

In the case of Blaine, holding the breath longer and longer required a change of awareness and conscious attention so that they would influence the body’s automatic systems, like gasping from the pain of carbon dioxide build-up or having one’s pulse accelerate from the stress of staying under water. Blaine used behaviors that were subject to intentional action — like breathing — to exert influence over emotional and automatic processes in his body.

I also use breathing techniques to control feelings, but the absence is the exact opposite. In order to go without breathing for extended periods, it is important to remove all thought as much as possible. That feeling cannot be described very well, other than I try to imagine going into the abyss of the ocean as I begin the breath hold and then everything fades slowly away.

Although things like ‘thought,’ emotion, breathing, pulse rate, pain perception, oxygen use, and stress are all linked, they are also on different levels or facets of reality. That is, some are more phenomenological states and others are imperceptible physiological conditions or processes.

Blaine’s practices generate greater separation between sensations (like pain) and responses (like gasping) that are typically automatic. This is one of the great things about having a human brain with substantial executive and inhibitory functions; we’re so good at inhibiting our own nervous system that we can do things like hold our breaths for seventeen minutes (well, at least one of us can).

Blaine, like most virtuosos of self control, also uses sensations as surrogate targets in order to manipulate his own body, struggling with sensation so that he can affect physiology. For example, he uses imagination and visualization (imaging the ocean abyss) to affect his body’s emotional response. Tierney has a longer discussion of Blaine’s training techniques here.

But Blaine also tells another story, that of learning from Kirk Krack, his freediving coach, how to manipulate his own body, in part by teaching Blaine how to shift his perception of what he was doing. In other words, it’s not merely Blaine’s own inhibitory capacity that allows him to resist the drive to breathe, the panic that one might feel, the excitement that might drive his heart faster and burn through his oxygen — Krack’s advice and guidance add another top-down layer of influence that eventually becomes Blaine’s own internal self-coaching. Krack’s interaction with Blaine becomes introjected into Blaine’s own techniques for self control. Even when he is alone in a sphere of water, Blaine’s highly tuned neural system carries with it the effects of social interaction that extend even to control of systems that we normally consider autonomic.

One thought on “Blaine breaks world record for breath-holding”