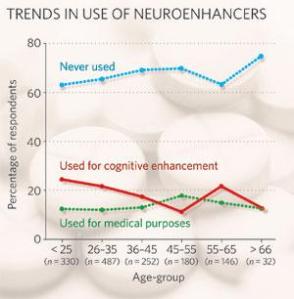 According to Nature, 20% of scientists in an informal survey admitted to using ‘cognitive enhancing’ drugs: Poll results: look who’s doping. Ironically, the original survey was triggered by an April Fool’s prank played on the scientific community. My initial thought was, Do they count caffeine? Of course, they didn’t. If they did, numbers would obviously be different.

Check out the Nature site for a more complete discussion, but the conclusion is worth repeating:

The most popular of the drugs used by respondents to Nature’s poll seem to have fairly mild neuroenhancing effects, says Chatterjee, who calls the massive media interest in these drugs “neurogossip”. Nevertheless, the numbers suggest a significant amount of drug-taking among academics. As Eisen’s April Fool’s prank spread from blog to blog, it was hard to tell who was in on the joke and who was taking the announcement at face value. Although tricking people was a goal, Eisen had been aiming for something so ridiculous that most would chuckle. Instead, he worries that he might have hit a nerve: “I think it did make it less funny because it is actually too real.”

The initial discussion that led to the poll was referenced by Daniel a while back in a great piece, Brain Enhancement: Beyond Either/Or, that explored this topic in greater detail. If you haven’t checked it out, you should. Daniel talks about the ‘unintended consequences’ that almost always accompany drug use. I don’t have too much to add to that except that, with what we know about neuroplasticity, this should not surprise us at all. The brain and nervous system tend to adapt to any changes in the overall environment they inhabit: the tasks they do, the condition of the environment (which is both inside and outside of the body), any other chemicals introduced into the equation.

What I’m struck by in this, however, is the social framework in which the use takes place. Daniel write about the effects on society overall from performance enhancing drugs. I’m looking at a slightly different angle: how the institutional structure I’ve worked within in two places very differently affects whether an individual in it might choose to use. Even though I’m working on a promotion application right now — as we speak, I’m in avoidance; when the post is over, back to it — I do not in any way feel the same intensity of pressure being an academic in Australia than I did in the US under a tenure system. Whereas performance enhancing drugs might have made sense to me at some point in the US, it’s really alien to me right now, sitting looking at the mountains, working at a reasonable pace with reasonable expectations. That is, rather than social forces working for or against use, there is a framework of rewards and expectations that has changed for me in two different settings; given my new framework, the whole emotional-rational calculus has shifted, and I can’t imagine taking them whereas I might have in a different environment. (With that, back to my own work…)