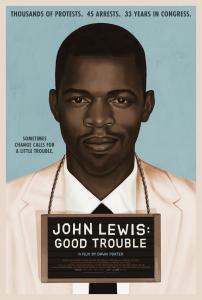 In-depth reporting from Politico – the intersecting histories and politics in one midwestern city.
And as I visited Oklahoma, it became clear to me that the strength of the Miami reaction to Wayne Day was an expression of tribe’s recent renaissance.

“Indiana’s always going to be very important to us because that’s home—it’ll always be home, even though we live here now,” Lankford said. “What we’re trying to do is rebuild from the loss. And in that rebuilding, we need the truth to be told about us.”

Together, You Can Redeem the Soul of Our Nation

John Lewis delivers a powerful exhortation to all of us.
Ordinary people with extraordinary vision can redeem the soul of America by getting in what I call good trouble, necessary trouble. Voting and participating in the democratic process are key. The vote is the most powerful nonviolent change agent you have in a democratic society. You must use it because it is not guaranteed. You can lose it.

You must also study and learn the lessons of history because humanity has been involved in this soul-wrenching, existential struggle for a very long time.

Landmark study on 11,196 couples pinpoints what dating apps get so wrong

Samantha Joel, the study’s first author and the director of the Relationships Decision Lab at Western University, says that her study crystallizes one thing:

“Really, it suggests that the person we choose is not nearly as important as the relationship we build,” she tells Inverse.

What Thucydides Knew About the US Today

Historians argue among themselves whether Thucydides is a moralizing philosopher or, in a common phrase, “the first scientific historian.” What is radical about him, and gives him his unerring clear-sightedness, is that he is both. He understands morals, not as a set of arbitrary rules imposed or wished upon reality, but part of the fabric of reality itself, in the same way that Greek philosophy had begun to understand physical laws as inseparable from reality. Thucydides came to the same insight that Ludwig Wittgenstein recorded centuries later when he wrote that ethics “must be a condition of the world like logic.”

Are breathing techniques good for your health?

When psychologist Roderik Gerritsen, of Leiden University in the Netherlands, reviewed physical and mental health benefits associated with contemplative activities, he concluded that their common focus on breathing reduced stress by increasing parasympathetic nervous system activity. “By slowing the breathing down, your heart rate goes down, you stimulate your vagus nerve, and you’re telling your body it doesn’t have to respond to any immediate threats,” says Gerritsen.

How to (Actually) Change Someone’s Mind

-Develop an evidence-base argument, Build rapport, and Utilize an outside advocate: “It’s not easy to have detractors, and it’s even harder to change their minds. The key is to understand the source of their resistance and use a targeted strategy that best resonates with your particular detractor. You’ll have a much better chance of getting a “yes.””