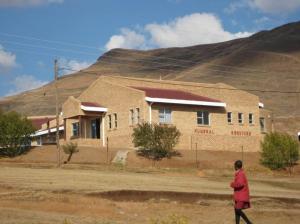 Imagine you are hungry. You have been hungry for weeks, with no end in sight due to a heavy drought that severely diminished your land’s production. Your gravely ill sister lives with you, as do her two young children, further straining your limited food supply. Then your neighbor dies. You do mourn, but you also feel relief – relief because you will be able to take your family to the funeral. There they will be able to eat.

This post examines food crises in Lesotho and the role funerals play in coping with these food shortages within a rural town and neighboring villages. In my senior thesis written on the costly funerals in Lesotho and the impact of HIV/AIDS on their practice, I found that the local Basotho people use funerals as a food coping mechanism. Lesotho often suffers from periods of drought that place a burden on food resources and force people to look for methods to supplement their daily food.

I will begin with a brief look at the factors behind the food shortages, followed by a description of funeral practices and how families are able to use them to for food coping. Lesotho is a small country in southern Africa. Through a quirk in British rule, it remained independent from South Africa and is now the only country to have its entire border completely surrounded by another country. The terrain is mountainous and has earned Lesotho the nickname of “the roof of Africa.” Less than eleven percent of the land is arable and farmers are at the peril of periodic droughts.

Lesotho also has one of the highest HIV/AIDS prevalence rates in the world, with some estimates as high as thirty-one percent of its over two million population carrying the virus (Brummer 2002). The high percentage stems from Lesotho’s history of labor migration to the gold and diamond mines of South Africa, where Basotho men would contract the disease and then bring it home to their families in Lesotho.

The attraction of mining employment to Basotho (from Lesotho) men comes partially from the lack of opportunities at home. Agriculture production has dropped in the past fifty years due to deterioration of the land through erosion, mono-cropping, and overgrazing, insecurities in the system of land tenure that inhibited farmers from securing their holdings, population pressure that increased exploitation of arable land, and environmental factors like hail, frost, and drought (Murray 1981). These factors, coupled with population growth, mean that the frequency and severity of food crises has increased in the last century.

The data for understanding the role funerals play as a food coping mechanism arises from thesis fieldwork of two six week periods spent in Lesotho in the summers of 2007 and 2008 while working with Touching Tiny Lives, an organization dedicated to monitoring and maintaining the health of children in rural Lesotho. The methods include interviews, both formal and informal, with Basotho people, and observations. The interviews focused on experiences relating to funerals, which included questions about the food served, reasons for attending, and overall cost.

The basics for a funeral in Lesotho are a coffin, a cow, and other food for visitors to eat. The coffin protects the body and is a sign of status. The cow is slaughtered with a knife and its entrails used in a ritual where the children have their heads shaved and covered with the innards, signifying their new status as orphans. The family cooks the meat of the animal to go on the table with the other food prepared for the funeral. Sometimes a cow is too expensive, so a family will use a goat instead. The only other food that is always at a funeral is papa, a starch made from maize meal and similar in consistency to thick mashed potatoes. Other typical food includes chakalaka (a cooked vegetable mixture) and fried cabbage.

Usually, people go to a funeral voluntarily, however according to the interviewees, some village chiefs require that everyone in the village go to a funeral. Many said that the reason for attending was to console the family of the deceased: “They are just going to console the person.” This fact points to the value of funerals in terms of social cohesion within a village. Helping fellow village members can reinforce relationships between families. The support is a two way street, with the family receiving emotional backing and the attendees getting food.

Food has major drawing power for funerals in Lesotho, as reflected in this quote: “Yes they just go to eat! Especially if the cow is slaughtered. The people call it, if they have slaughtered a cow, a bus, but if it is a goat then it is a taxi. If it is a bus they know that it is a lot of meat.” If the number of people attending varies based upon the amount of food, then you could assume that for many villagers outside of close friends and family, consoling is not the top priority.

However, none of my interviewees openly admitted going to a funeral for the food; only “they” (other people) would go to eat. This observation may only be due to translation issues (some interviews were conducted with a translator), but more likely comes from the desire to not appear needy. The interviewees would not want to admit that they go to funerals just so they can eat. Identifying others as the users of the slang terms “bus” and “taxi” distances interviewees even further, implying that they would not use the words themselves.

From working experiences with Touching Tiny Lives, the need for supplemental food is evident. One of the services Touching Tiny Lives performs is giving food to families who have children. An emphasis is placed on the need for the food to go to the children, but tracking the children’s weight shows that this is not always the case. At times the only meal local children obtain is the daily lunch at school. The scarce diet, coupled with illnesses, creates a major health crisis that is being fought by local clinics and organizations such as Touching Tiny Lives. If funerals do provide a way to feed the needy, then this research could be used by these organizations to feed people through reinforcing local customs rather than foreign models of food distribution.

A previous study completed by Mphale (2002) indicates that people in the lowlands use funerals as a food coping mechanism during a time of food crisis. The responses obtained through the interviews and observations suggest that funerals are also a coping mechanism in the highlands. The The frequency and duration of food crises seem to have increased as well, since the spread of HIV/AIDS has lowered the number of able workers. Many households are without a male head and little or no income. These factors contribute to food shortages and malnutrition. Food is usually not the sole motivating factor for attending the funeral, but at certain times the presence of a quality meal plays a prominent factor in the decision to travel to the site of the ceremony.

The food at funerals connects the impact of HIV/AIDS and the ongoing food crisis, with the high costs and associated rituals. While HIV/AIDS kills more people and creates more funerals, others are able to be nourished from the traditions of Lesotho. This balance between life and death hinges upon funerals. My research encourages a strange and unorthodox solution, where the dead help to feed the living. Funerals are an obvious target for aid, where food and money can directly impact an entire village. While this intervention would by no means solve every problem, it would help to ease the pain felt in the hearts and stomachs of those most directly impacted by HIV/AIDS.

9 thoughts on “Funerals and Food Coping in Rural Lesotho”